Fishing in Malaga offers infinite possibilities and has many great places to practice big game fishing. The Strait of Gibraltar is relatively close, so fishing in Mala...
Read more..

Fishing in Malaga offers infinite possibilities and has many great places to practice big game fishing. The Strait of Gibraltar is relatively close, so fishing in Malaga is considered top level worldwide. Whether you want to fish in Malaga part-time with the family or spend a whole day fishing these Andalusian coasts, Malaga is a great choice. 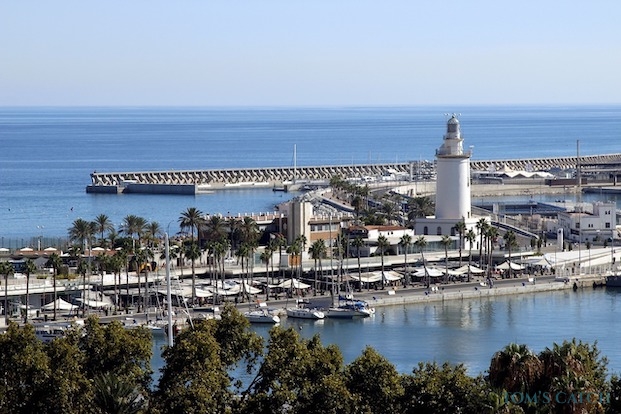 From 750,00 €
We recommend
Updated availability
See all Charters in Malaga

The Costa del Sol offers more than 160km of coastline from Nerja, on the eastern border of the province of Málaga, to Manilva on the western border. It offers the perfect geography for sport ports and for fishing in Malaga, with 4500 moorings and high fishing opportunities.

Marbella’s sea is one of the most interesting landscapes to practice fishing on the Costa del Sol and possibly one of the best places in the entire Mediterranean.

Pink Dentex: The pink dentex (pagrus auriga) is usually quite large (90cm) and can weigh 11kg or more. Its colour is usually pink at the moment of capture, going more red later. It lives close to the Costa del Sol between 2 and 200m of depth in rocky zones or mixed areas of sand and rock. Fishing in Málaga is practiced by trolling with natural bait. You can fish almost all year, but February and March are usually the best months to catch this species.

Dentex: Dentex can be found between 0 and 200m of depth, depending on whether young or adult, with the younger staying close to the shore and the older in deep water. To fish dentex in Malaga, either deep trolling or bottom fishing with a natural bait are the most successful techniques. Dentex feed mainly on fish, crabs, mollusks and their favorite, squid. In Malaga, you can fish almost all year, trolling to anchor or with a natural bait. April and May are usually very good months for fishing dentex.

Red tuna: Red tuna can be caught with the trolling technique from April until August, but you can also catch them with chumming in July and August. A very spectacular way to catch tuna between 20 and 100kg is with spinning. In Malaga, spinning means using stickbait and big jigs which they have to be picked irregularly using sometimes firm pulls, stops and fast picks again. The best known and recommended place for local people is definitely the Strait of Gibraltar, because it is a mandatory passage for the migration of Tuna.

Grouper: The grouper fish is perfectly matched to the seabed of the Costa del Sol, so the art of catching it is by deep trolling or bottom fishing with a natural bait.

Black Spot Sea Bream: The black spot sea bream should be fished in the deep sea (200 - 400m depth). The younger fish are more coastal, few live in few deep water and they swim grouped in large shoals. They live forming small banks and as they grow older they move into deeper and sandy places. On the Costa del Sol, the black spot sea bream is captured in great depth (200-400 meters deep) especially during the winter months.

Spring: The spring fishing season in Malaga runs from April or May. At this time you can begin to practice high-speed trolling and spinning to catch the bluefin tuna, albacore and little tunny. Spring is also great for fishing in Malaga, anchored or drifting with live bait for catching dentex, grouper or tuna.

Summer: During the summer in Malaga is a good time to fish bluefin tuna by chumming. This fishing can be done on the high seas 30 miles off of the coast. In the Strait of Gibraltar bluefin tuna can be caught by trolling with artificial bait, because the currents do not allow fishing with chumming. Closer to the coast you can use trolling with natural bait (squid or mackerel) for catching dentex, grouper and amberjack.

Fall: Malaga in autumn is considered an excellent time for coastal trolling with small lures and small feather for fishing various species such as bonito, mackerel, little tunny and dolphinfish among others.

Winter: Winter in Malaga is the perfect deep sea fishing time, where you can find a wide range of species. Some examples are the black spot sea bream, forkbeard, conger eel, atlantic wreckfish, grouper and hake. February and March are usually very good months for fishing big pink dentex by deep trolling with natural baits. This technique can also catch grouper, dentex and amber jack.

All year: Bottom fishing in Málaga can take place at any time of the year.