Situated in the south of Portugal, Algarve is famous for its five star hotels, green and well maintained golf courses and long sandy beaches that stretch as far as the...
Read more..

Situated in the south of Portugal, Algarve is famous for its five star hotels, green and well maintained golf courses and long sandy beaches that stretch as far as the eye can see, framed by golden and dramatically steep cliffs. On thing that is sometimes not as well known to the tourists travelling here is the Atlantic Ocean also offers excellent sport fishing conditions both off-shore and in-shore. 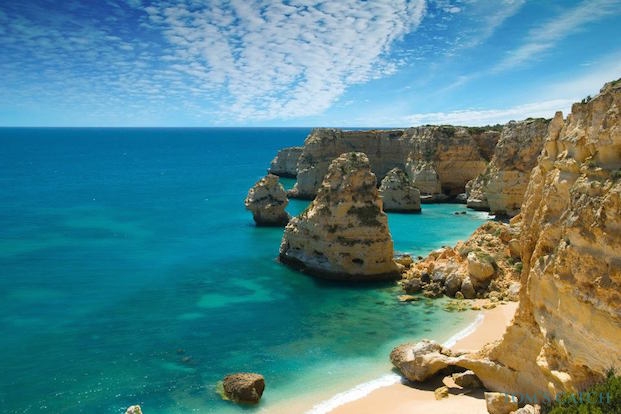 From 240,00 €
We recommend
Updated availability

Tuna Fishing in the Algarve

July is the best month for Tuna Fishing off the coasts of the Algarve. Fishing charters from Faro, Olhão, Tavira, Vilamoura etc use to troll offshore for Bluefin Tuna. Some guides prefer live mackerel or horse mackerel and fish drifting.

The Algarve is a premium Big Game Fishing destination known by fishing gurus all around the world. Madeira and the Azores are first class Blue Marlin destinations; but let's not forget that the bill fish and various tuna varieties also frequently visit the waters of the Algarve. Situated 45 nautical miles off Portimão (Algarve) the Picos Herminios are a famous hotsport Blue Marlin, White Marlin, Swordfish, tuna and shark.

This underwater mountain range is located about 36 nautical miles off Olhão and Faro, and is a stronghold location for blue marlin! This underwater highland passes from approximately 1000 meters to 260 meters of depth at its southern slope and an equally intimidating 700 meters deep to 260 meters on its northern slope. It forms a table at its summit of about 4 nautical miles square.

The powerful currents caused by the change in ocean depth along these two slopes form strong upwelling that concentrate large amounts of forage fish in the area.

Compared to the Azores and Madeira, anglers believe that there's more Blue Marlin around the islands, but the marlin caught in Picos produce a much higher average weight.

But, it’s not necessary to go all the way to Picos. Most big game fishing trips are done around the canyon 12-14 miles off the coast. For white marlin fishing trips in end of July, August, September and early October, captains actually recommend the coastal waters for the Algarve off Tavira, Faro, Vilamoura etc.

The Blue Marlin fishing season starts towards the end of June, when the ocean temperature starts to naturally warm up. They stay in this area until the end of October, while the White Marlin stay till the end of November. Bluefin tuna can be caught between the months of May/June and August. Other great sportfish on offer in these waters are Albacore, Dorado, Spear fish, Skipjack and Amberjack. Blue sharks are the most common shark but you can also catch Mako and Hammerhead sharks. There are yearly Marlin fishing tournaments that run from Vilamoura marina and Tavira.

Other forms of fishing such as bottom fishing and bait fishing can be done all year round.

The Blue Marlin is the Algarve fishing favourite when you are talking about big game varieties. This powerful fish can provide quite some excitement and action during your next fishing trip. Between July and November Grander Blue Marlin gather around the massive sea mounts from the marlin hotspot called "Picos" and are also common at the canyon off Faro. Make sure you have the right fishing tackle (such as Shimano Tiagra 80lb or even 120lb) on board. The best time to fish them is from late May to November. They can grow up to an intimidating 1000lb! Be prepared for a tough battle and challenge your not going to forget in a hurry.

In the Algarve fishing charters target Bigeye tuna by trolling the surrounding deep seas with artificial lures and on occasions natural bait. Bigeye tuna and other tuna varieties such as Albacore and Bluefin tuna can be fished off shore during the months of April, May and June.

Shark such as Blue Shark and Mako can be caught chumming a smelly mixture of blood and fish pieces, this is used to attract them towards the boat. This spectacular fish is quite common in these waters, although we encourage people to release the fish back into the ocean once caught.

This Sea Bream is caught at depths of 200 - 400m. Young fish are generally found closer to the coast and in shallower water as they swim grouped together in big schools of fish. They generally live in small shoals and as their age increases can be found in deep, sandy places, close to rocky areas and sea wrecks.

Enjoy the local food in the hundreds of bars & restaurants of the Vilamoura, Faro, Tavira, Portimão, Albufeira & Sagres.

A Sports Fishing Licence (Licença de Pesca Desportiva) is required to go fishing in the Algarve. Children under the age of 14 are exempt if accompanied by a parent who holds a valid fishing licence. Normally the fishing licence is included in the price, but not every fishing boat or fishing charter in the Algarve does included this in the deep sea fishing trip. When you're looking for fishing trips in Portugal in general, check if your days fishing includes the fishing license. The good news is that the licenses are really cheap and can be purchased on board. Whether you go reef fishing, full day deep sea fishing or big game fishing, the price for a license is the same. A Daily Fishing license will cost you 5€.