You are here: Home › OUR BLOGGERS › PLACES › Marlin Fishing: All You Need to Know

Let’s begin with the basics of the billfish species. What classifies a fish a billfish? A billfish is a predatory fish that are large in size and have a long bill or sword-like beak. Billfish can weigh over 1000 pounds and often grow to be longer than 13 feet. Marlin, Sailfish, Swordfish, and Spearfish are all billfish that are considered popular offshore game fish. Similar to birds, billfish are migratory animals and are constantly following warm waters. Maryland, North Carolina, and Florida are a few of the best billfish fishing destinations in the world. 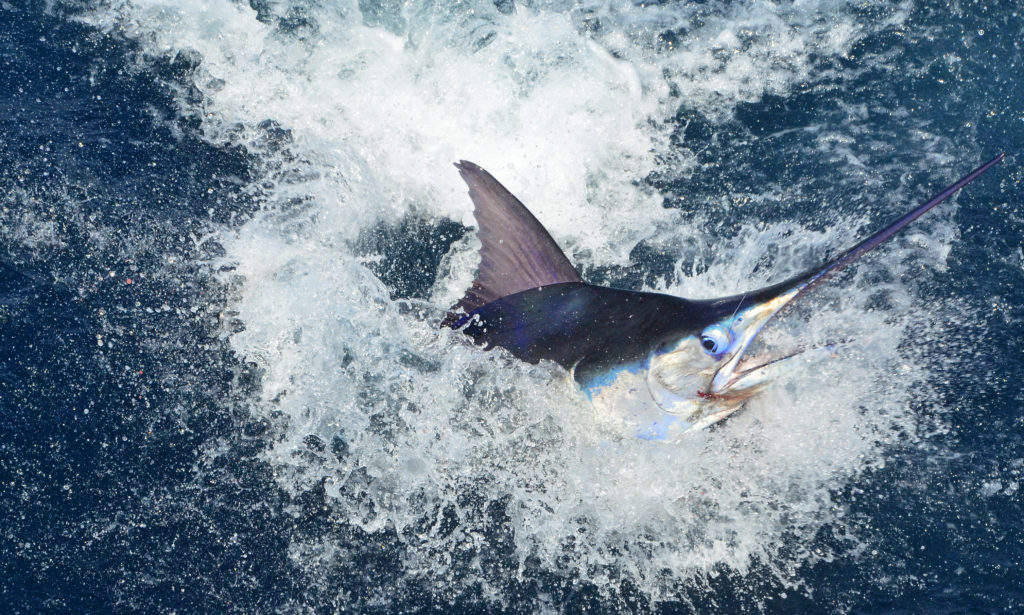 Every summer, in Ocean City, Maryland, fishermen gather for the biggest billfishing tournament. Travel to the Outer Banks of North Carolina to fish for some of the most beautiful blue and white marlin and sailfish on the planet. The Caribbean, the Gulf of Mexico, and the Atlantic Ocean are prime waters for all of the billfish imaginable. Florida is surrounded by water filled with blue, white, and striped marlin, sailfish, swordfish, and spearfish.

Since billfish migrate to spawn, eat, and generally like to stay with warm waters, the best billfishing season depends on your location. In the Atlantic Ocean, the best season is between July and September. Florida has a long season because the waters surrounding the state remain warmer for longer. Most anglers will describe billfishing as an art form, but every good fisherman has hidden tricks of the trade. Finding the perfect consistent trolling speed and learning the bait-and-switch technique are a few tips to get you started.

One of the biggest fish in the world, Blue Marlins, also known as blue-water fish, is the largest marlin swimming in the Atlantic Ocean as well. Anglers dream of hooking this beautiful fish, which is cobalt-blue and silver in color, has a prominent dorsal fin, and a dangerous spear-shaped beak. Blue Marlins have been known to weigh up to 1,985 pounds and reaching lengths up to 14 feet. However, on average, 400-600 pounds is a more common size. Females live to be 27 years old on average, while the males only live to 18 years of age. Blue Marlins reside in tropical waters in the Atlantic, Pacific, and Indian Oceans. In Japan, Blue Marlin is a delicacy served as sashimi.

Black Marlins have a shorter upper jaw with pectoral fins weighing 150 pounds. Found in tropical and subtropical regions in the Indian and Pacific Oceans, the Black Marlin is one of the largest bony fish weighing up to 1,653 pounds and growing to lengths of 15 feet. Black Marlins are believed to be the fastest fish on Earth. Hatching from eggs as small fish, once they grow to weigh more than 1,000 pounds they become known as granders. 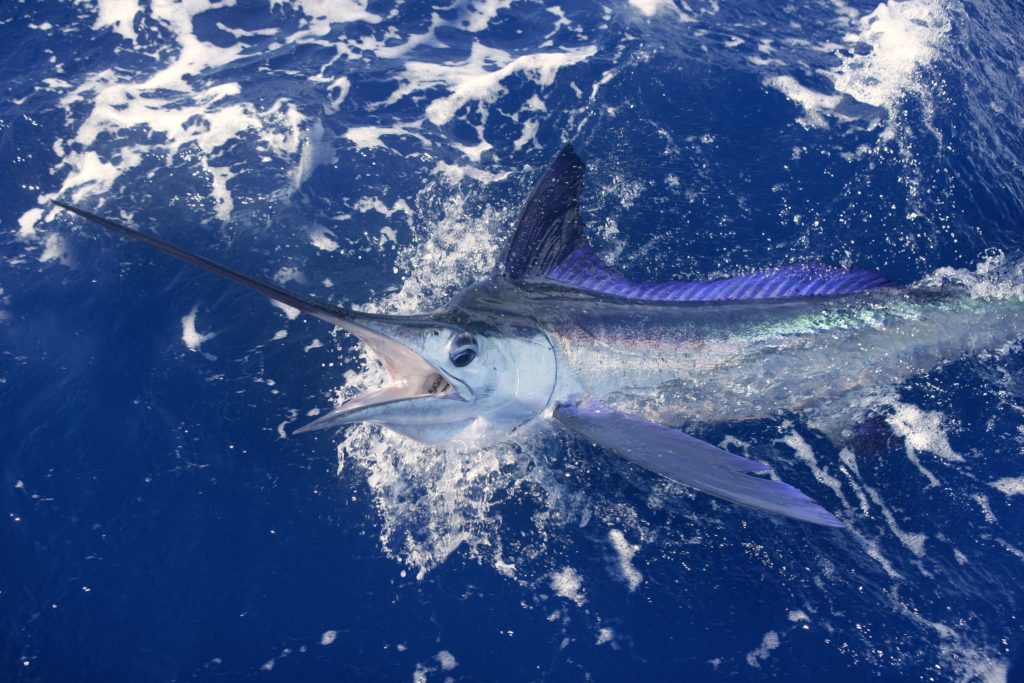 Also known as the Atlantic While Marlin and Skilligalee, White Marlin are among the smaller, more solitary billfish species. On average, White Marlin grow to be just over 9 feet and only weigh 180 pounds. With a thinner upper spear jaw, White Marlins are actually dark blue on the top of their bodies and a silvery-white color underneath with brownish spots. Their dorsal fins are an extraordinary dark blue with blackish-colored spots. The White Marlin is a species of billfish that is found in the epipelagic zone of tropical and subtropical waters of the Atlantic Ocean. Living in deep sea waters, they enjoy hunting small fish schools.

Another beautiful marlin species, Striped Marlin has dark blue-black on top that fades into a silvery-white color on the bottom side. Blue-colored stripes created by small dots and bands give this billfish its name. Otherwise known as Nairagi, A’u, Makijiki, Barred Marlin, Spikefish, and Striped Swordfish, the Striped Marlin is one of the smaller marlin species, weighing anywhere from 250-450 pounds on average, reaching up to 14 feet, and can live up to 20 years old. Swimming in tropical to temperate waters in the Indo-Pacific Oceans and the West Coast, the Striped Marlin differs from other marlins because they reside near the surface rather than deep water like most marlin species. Over 400 pounds and 13.5 feet is the record weight and length for this species. They feed on mackerel, sardines, and anchovies, but also enjoy squid. Striped Marlin might be predators themselves, but there are always bigger fish in the sea. Large sharks and whales will prey on marlins.

Best Places to Fish for Marlin

The best places to fish for Marlin vary with the seasons. Marlins chase the warmer waters, but their migratory patterns have been well-researched and the best anglers know how to find them. Australia, Portugal, Hawaii, Mexico, Costa Rica, Panama, Galapagos, Canary Islands, and Cape Verde are some of the most popular locations to catch these billfish.

Marlin Fishing in the Canary Islands

Anglers have discovered that Blue Marlin found near the Canary Islands are often bigger than the average sizes, often weighing over 800 pounds. The deep waters off the west coasts of these volcanic islands are incredible locations for marlin fishing. Lanzarote, Fuerteventura, Tenerife, La Gomera, La Palma and Gran Canaria are popular places to begin your marlin fishing journey. Big game fishing tournaments are hosted here from July to August.

Cape Verde is a marlin-fishing paradise with regards to the fish populations and sizes. It has been recorded that more than 20 Blue Marlins caught here weighing over 1,000 pounds, and that is not even taking into account those monster fish that was just caught and released!

Marlin fishing in Mexico has an incredibly long season ranging from early Spring through late Summer. On the pacific side (Cabo San Lucas, Puerto Vallarta, Mazaztlán…), at the peak of the season, May is the best time to catch a variety of big game fish, not just Marlins! In the Atlantic Ocean, the best time for marlin fishing in the Riviera Maya is from early March to August.

With the incredibly warm tropical climates, Central America has always been a popular offshore fishing destination. Billfish, Marlins, Yellow-fin Tuna, Dorado (Mahi), and Wahoo also enjoy the Central American climate. The isthmus in Panama that connects North and South America is a location of world records, fish quantity, and an almost year-round fishing season. The movements of two major ocean currents and seasonal winds that blow from the Gulf of Mexico and the Caribbean create the perfect paradise for so many diverse species.

Marlin Fishing is prevalent anywhere that has warmer waters, deep waters, drop-offs, seamounts, and banks. Places with bait fish like bonito and tuna is where to find higher populations of Striped Marlins. Blue Marlins are prevalent in the waters off the coast of the Galapagos Islands. Isabela and San Cristobal Islands are known to produce giant marlins over 1,000 pounds.

How to Fish for Marlin

Typically when fishing, you cast a reel into the water with bait on a hook, but with billfishing, anglers use a fishing method called trolling to catch big game fish. To troll for fish, fishermen cast out multiple lines with live bait on lures allowing them to follow the moving boat in an attempt to tease the fish.

When offshore, deep-sea fishing, artificial lures are beneficial when trolling at higher than normal speeds and often appeal to billfish species because they are predator fish after all. The natural movements of lure models is an important feature when fishing with artificial lures. Some of the best marlin lures include Black Bart 1656, Mold Craft Wide Range, Pakula Lumo Sprocket, Copa Fishing Lures Tado, and Marlin Mafic Ruckus to name a few.

Anglers have found that Blue Marlin prefers smaller tuna species for live bait. A pro-tip when using live bait is to troll slowly because if you troll too fast, the bait will not survive and you will no longer be fishing with live bait. Billfish will bite bait whether it is alive or dead, but there are three categories of bait that billfish are more likely to bite; live bait, rigged natural bait, and artificial lures. Billfish like the hunt of live bait so that should obviously be a top choice when fishing for any big game fish. Most anglers use smaller tuna fish, Spanish mullet, and squid. A popular choice among fishermen when using rigged natural bait is ballyhoo.

For most anglers, fishing for big game fish is a dream. To catch one of the ocean’s biggest fish in the world is a top goal for most avid fishermen. Knowing how and where to find the fish is an important element in being a successful angler. In addition to having the right bait and gear, a good fisherman does their research or hires someone to do so before stepping foot onto the boat. Marlin species are among some of the most sought-after billfish to catch and the most fun catch because they are so powerful and a true testament to an angler’s skills. Many catch and release these beautiful aquatic creatures, but many of the trophy billfish become stuffed wall mountings as a reminder of the catch of a lifetime.