You are here: Home › FISHING CHARTERS › Planning a Marlin Fishing Holidays to Cape Verde? This is what you have to know.

Cape Verde is quite possibly the most exciting, diverse and life changing place to fish for Blue Marlin. In fact, the archipelago is renowned for being the best fishing site in the world to target this magnificent predator. However, planning a fishing holiday to Cape Verde could prove to be a challenge. So here are some what you need-to-know facts. This is a simple travel guide for your next big game fishing adventure.

Blue Marlin patrol the waters of Cape Verde all year round, though some months are better than others for Marlin fishing. However the peak season is April to early July, although a lot depends on this, like conditions such as sea currents, water temperature, winds, baitfish etc.

Some captains like to fish from the fighting chair, others prefer stand-up and pitch bait fishing which is always a great challenge for both anglers and crew. Besides impressive numbers of Blue Marlin you can catch Wahoo, Tuna, Sailfish, Jacks and Sharks on Cape Verde.

During the summer months, these pelagic fish migrate North towards the Canary Islands, Madeira and the Azores. Generally speaking from July to November the Marlin fishing might be less consistent than in Spring time, but the chances of catching blue Marlin at this time of the year are still quite high (especially if you compare to the Canary Islands, Madeira & the Azores).

In these months the anglers combine the Marlin fishing with jigging. The calmer weather allows for target fishing the massive amberjack, wahoo, grouper & a lot of other reef fish on untouched fishing grounds in the North of the islands, which are usually inaccessible due to strong winds & waves.

January & February months can be very windy which make the boat fishing trips harder, although some Captains know calmer areas where you can shelter from the wind.

Which are the best islands for Marlin Fishing?

Most anglers would agree that São Vicente and its surrounding waters, Santo Antão, Santa Luzia, are the most prolific for Marlin fishing in Cape Verde. No wonder almost all of the fishing charters are moored in the port of Mindelo at the Big Game Fishing Club.

The reason being is that the sea floor has very interesting structures with sea mounts, drop-offs and banks that create all kinds of upwelling currents. They attract baitfish, which in turn are on the menu for Marlin, Whales, Shark, Tuna… 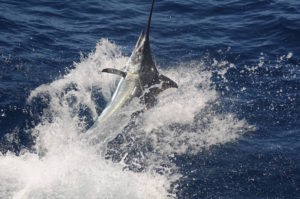 “Located in Mindelo, São Vicente – a northern island of Cape Verde – this fishing charter is a great choice for your next marlin fishing adventure. Our fishing day is at least 10 hours, when the fishing is good we stay longer out of course. We use to start the day between 6 and 8 depending on the bite time, tides and the preference of our anglers.” Check out this fishing charter in São Vicente >>

The channel between Santo Antão and São Vicente generates a tremendous current from North-East to South-West, when you sail back to the port of Mindelo you’ll experience this current and it’s “washing-machine”!

Sal is also a good island, but the sea bed hasn’t the same variety of São Vicente. The drop is only minutes from the pier in Santa Maria, so you can start trolling practically from the beach. Half day trips are possible in Sal from 350€ which is a very reasonable price.

“Located in Santa Maria, Cape Verde, this fishing charter is excellent for your deep sea fishing trips with your family and friends. Everything is on board to enjoy a wonderful day light tackle fishing in Santa Maria. We offer half day or full day fishing trips and go an extra mile to ensure your trip is memorable and productive. Everyone is welcome aboard our fishing charters – from novice to experienced anglers and families. Book this boat now and enjoy a great day fishing in Santa Maria. The IGFA certified captain Carlos, is specialised in deep sea fishing, trolling, big game fishing, spinning, jigging and much more.” Check out the fishing charter in Sal >>

Boavista is also great for fishing although generally speaking, the fishing areas are further away. The captains only do full day trips for this reason. Recommended fishing charter in Boavista: Mio Amore >>

How to Get There?

Flights: You can get them daily to the Cape Verde via Lisbon (Portugal) or via the Canary Islands. There are also direct flights from Germany / UK / Holland and France. From the US you can take the direct flight from Boston or a connection via Lisbon or the Canaries.

What should you pack for a trip to Cape Verde?

Despite the latitude, the climate in Cape Verde is mild with temperatures generally not too high, due to a cool sea current and to the trade winds. We recommend to bring a sweatshirt and light jacket for the days on sea and during the night on land.

Do I need a Visa?

Visitors to Cape Verde must obtain a visa to enter, unless they are coming from one of the visa-exempt countries, which are mostly in Africa. You can get a Visa upon arrival at any of the international airports. Visas may also be obtained in advance from a Cape Verde embassy or consulate.