You are here: Home › OUR BLOGGERS › 6 Things you should know about Bluefin Tuna Migration

Bluefin Tuna are the largest of the Tuna species and can live up to 40 years of age. Bluefins migrate across all oceans and can dive as deep as 900m. The Bluefin Tuna’s anatomy is built for speed with retractable fins and eyes that sit flush to their body. As such, they are voracious predators from an early age and hunt down schools of mackerel, herring, sardines & anchovies. Bluefin tuna migrate during the whole year to spawn and to find food. In this article you’ll learn more on their migration routes and spawning behavior. So let’s dive in.

They are sight hunters and believed to have extremely sharp vision. The three species of Bluefin are the Atlantic, Pacific and Southern Bluefin Tuna. Bluefin Tuna are top predators in the marine food chain and provide an important balance within the ocean environment. There is currently a debate on whether the Pacific Bluefin Tuna as an endangered species. They are a delicacy for sushi in Asia and fetch a hefty price therefore fishermen are using sophisticated technology and the fish seem to be disappearing as a result of the increased fishing. 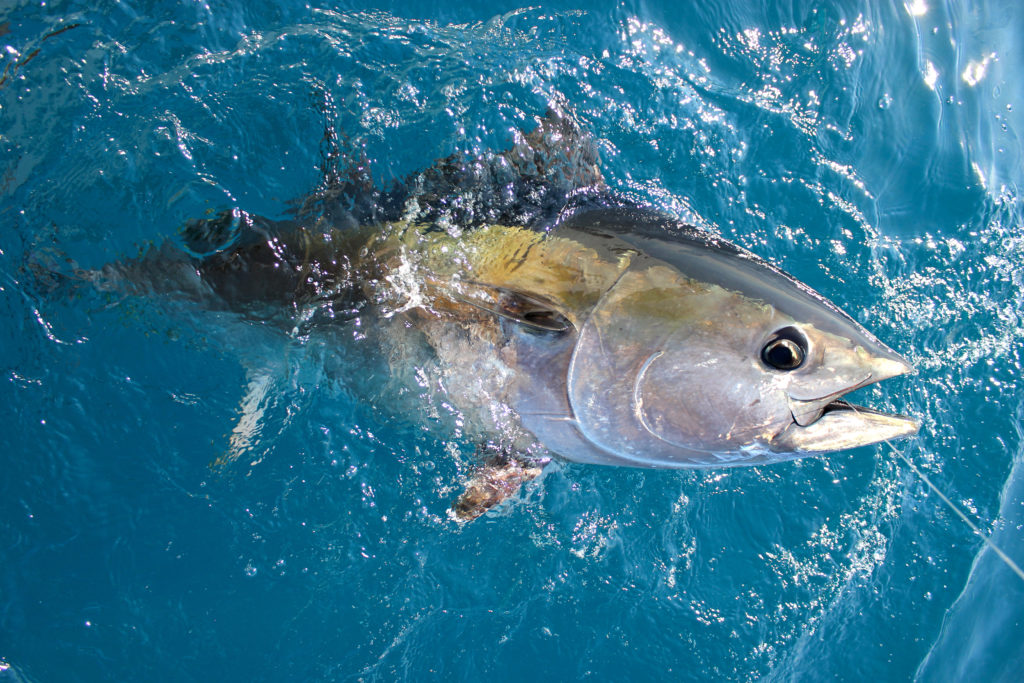 Bluefin tuna caught in the Mediterranean Sea off the French Riviera

Most fishing charters though practice catch and release. After catching the bluefin tuna and having made some pics to show home, they release the tuna in perfect conditions. Several charters even tag the fish for scientific purposes, to track their migration, feeding and spawning habits.

Atlantic Bluefins have been recorded at weights of up to 680 kg // 1500 lbs. The males of this species are known for their pinkish grey or bluish-greenish skin, with a white belly. The females of the species are blackish grey with grey and white lines on their bodies.

Where does Atlantic Bluefin Tuna spawn? 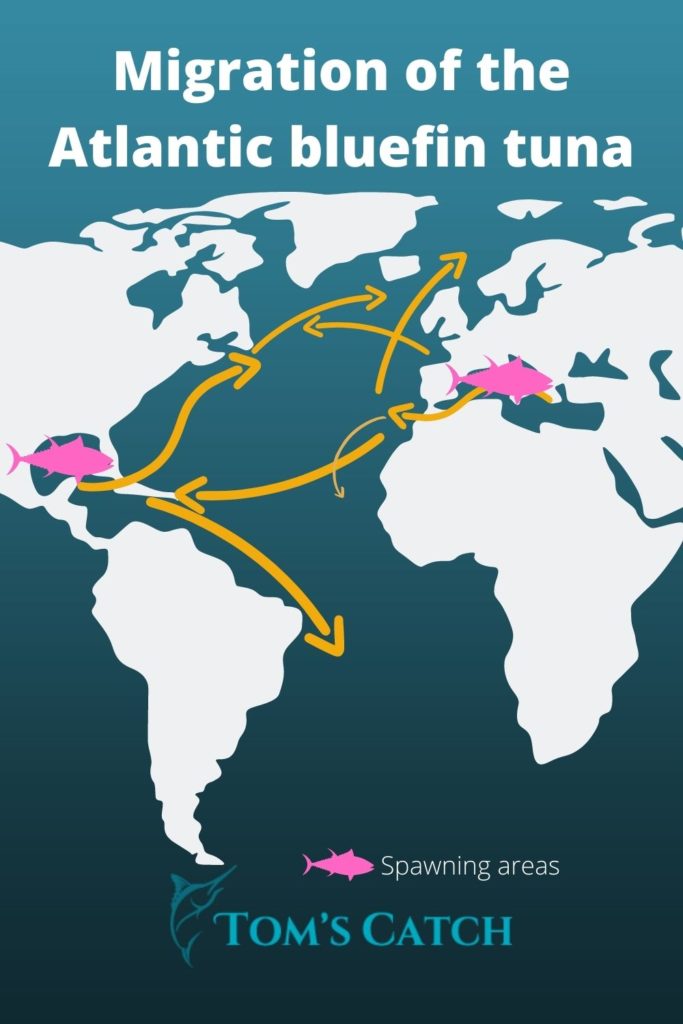 Early spring (March – April) the Atlantic Bluefin Tuna migrate into the Mediterranean Sea, passing the Straits of Gibraltar. From here, they follow the maritime routes along the Spanish mainland towards the Balearic Islands. Here, the salinity, the water temperature and amount of forage fish is perfect for spawning. 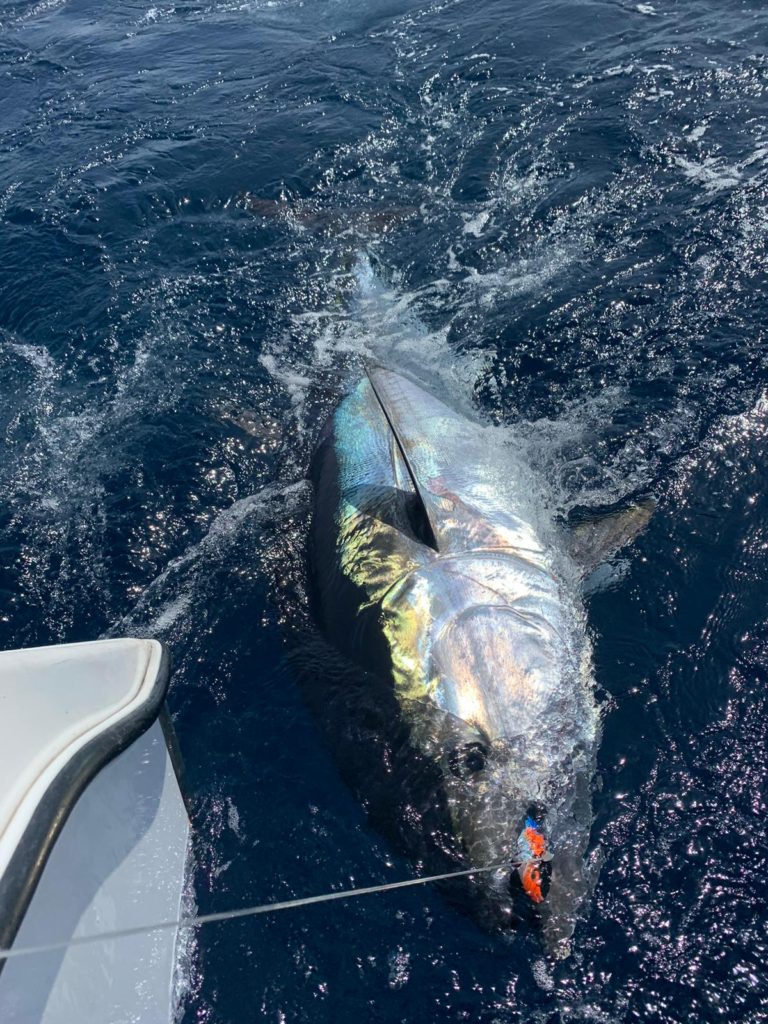 Bluefin Tuna catch & release on the Cavalier in Gran Canaria

The Pacific Bluefin Tuna (Thunnus orientalis) is a large and aggressive species that is found in the warm Pacific Ocean. It has been recorded at weights of up to 450 kg and 3 metres in length and can live up to 26 years old. Around 80% of commercial caught Pacific Tuna are consumed in Japan and are considered particularly suited for Sushi and Sashimi.

Where does Pacific Bluefin Tuna spawn?

Bluefin Tuna migrate from their spawning grounds in the Sea of Japan and travel over 8,000km across the Pacific Ocean to the warm waters of California where they spend several years feeding and growing traveling up and down the coast between Mexico and as far north as Washington. At around the age of 6-7 many return to the Western Pacific to spawn around the coast of Japan. 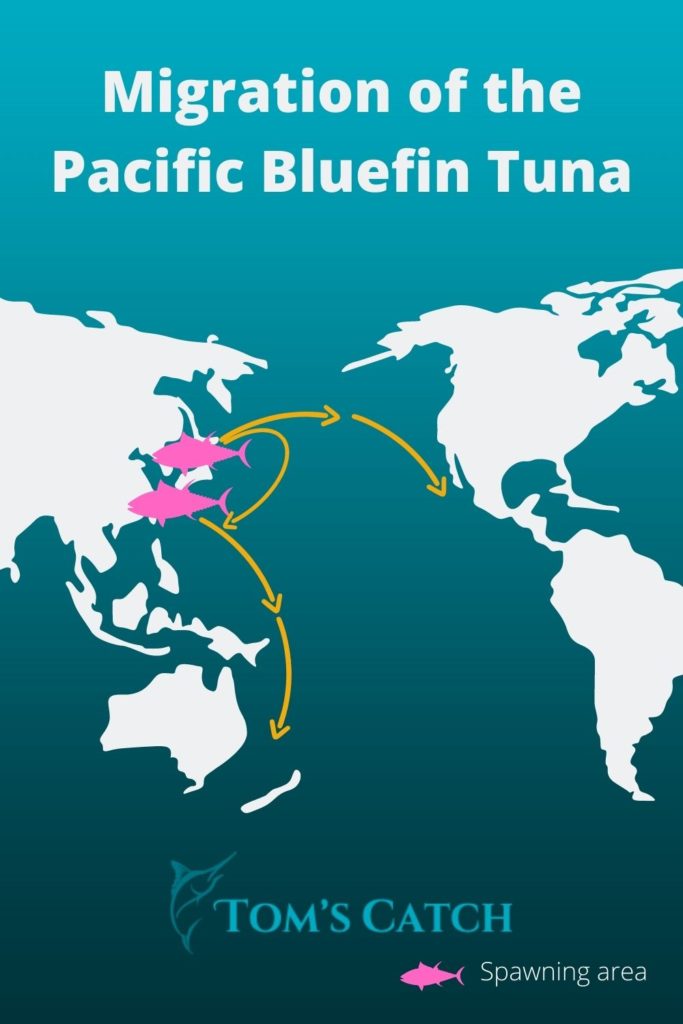 Migration and Spawning grounds of the Pacific Bluefin Tuna

Pacific Bluefins spawn in the North Western Philippine Sea and in the Sea of Japan usually around April to August, but this is dependent on the region. Females can produce between 5 million and 25 million eggs.

Southern Bluefin Tuna (Thunnus maccoyii) is a migratory species and managed internationally. Southern Bluefins are found in the world’s waters, mostly between 30 degrees South and 50 degrees South. Southern Bluefins can grow up to around 2.5m and weigh up to 260kg. They have a lifespan of up to 40 years of age. The body of this fish is streamlined with large amounts of dorsal and anal fin rays, which are rounded and tapering. There are a few long and narrow pectoral fins near the tip and around the sides of the body, while the tail is short like that of the Blackfin Tuna.

Where do Southern Bluefin Tuna Spawn? 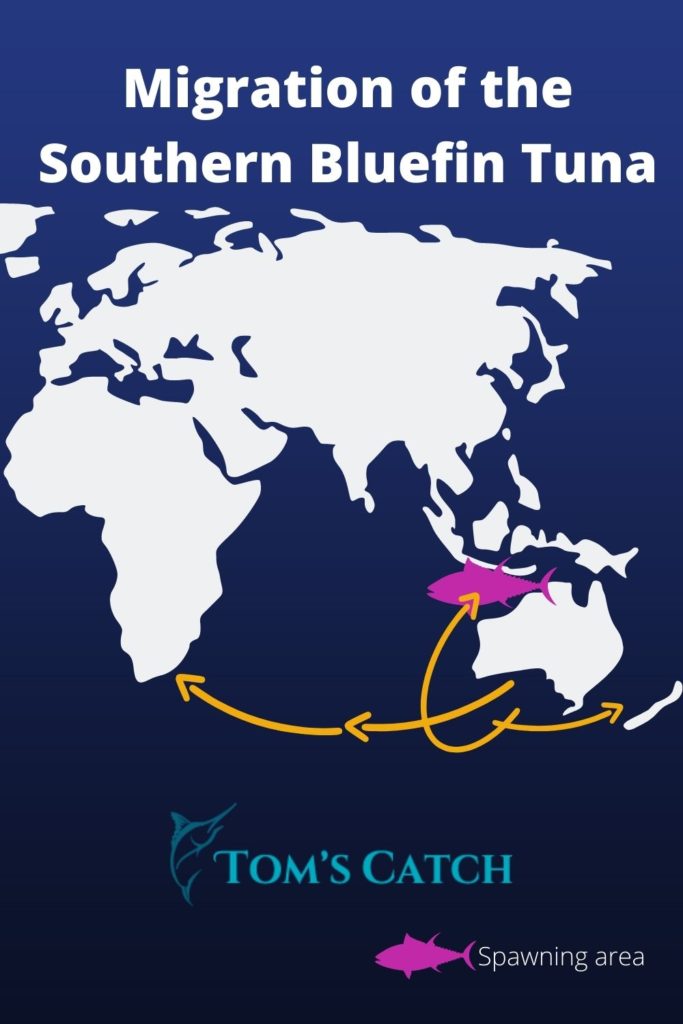 Migration and Spawning grounds of the Southern Bluefin Tuna