The Blue Marlin (Makaira nigricans) is probably the most wanted fish in the sport fishing world. The magnificent fighter usually feeds during day time on fish, octopuses and squids. Blue Marlin is mainly caught trolling with artificial lures or with dead bait (bonito, mackerel...).

Blue Marlin are the fish that many people imagine when the words “trophy fish” come to mind. They’re synonymous with offshore fishing and you’ll find their likeness on many bait shop logos, fishing t-shirts, and charter boats. The reason for this is that they are a beautiful fish that is an impressive specimen and an exciting catch. Blue marlin grow to be up to 14 feet long and can weigh just short of 2,000 pounds. Although these sizes are definitely on the extreme end of the spectrum since the average size for blue marlin is around 300 pounds and 11 feet long. They can live as many as 27 years for females and as long as 18 years for males. Their markings are recognizable due to their steely blue upper portion and contrasting silver or white underside. They have their trademark “spear” for their upper jaw. They also have a very noticeable dorsal fin. A unique feature of blue marlin and all billfish is their countercurrent exchanger, a blood vessel configuration that keeps their brains and eyes warm, which gives them the ability to see more clearly while hunting.

Blue marlin are found far offshore and are a migratory species. They generally stay near the surface of the water, where temperatures are warmer, and once they find a warm current in the ocean, they’ll try to follow it. Blue marlin has been known to migrate across entire oceans at times throughout their lives. 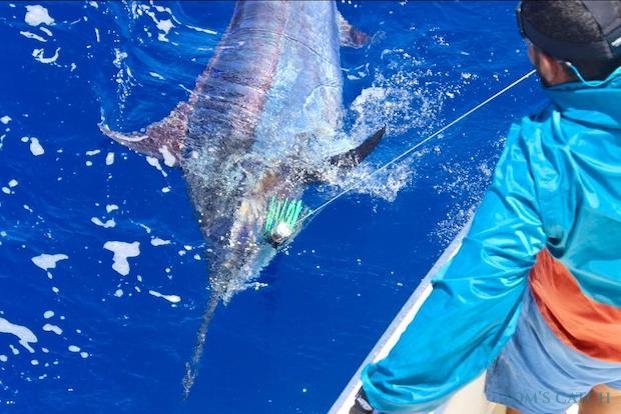 In the Atlantic, popular spots include Ghana, Cape Verde, Canary Islands, Madeira, Azores, Portugal and fishing in Punta Cana and the Caribbean in general. Pacific blue marlin fishing destinations include but aren’t limited to, Hawaii, Mexico, Costa Rica, and Guatemala. Australia also has some of the best blue marlin fishing in the world.

How to fish for Blue Marlin

Blue marlin like to spend their time far offshore hunting baitfish, so you should be prepared to possibly have a long trip back after the day is done, which means keeping an eye out for storms is extra important.

One of the best methods to locate marlin early in the season is by trolling a set of marlin lures or rigged dead bait. Most boats troll at 6 to 8 knots.

The usual way to fish with live bait for marlin is by trolling these large baits, anywhere from 2 to 3 knots. You’ll want to be using 50 to 80 class tackle (some professionals recommend lighter, around 30 class since heavier tackle and harder fighting might cause the fish to dive deeper). Put your bait on a 10/0 to 16/0 circle hook and make sure to wait a few seconds before reacting to allow the blue marlin to swallow the bait, otherwise, you might be reacting to the baitfish trying to get away from the marlin, or you might lose the marlin altogether.

At this point, you’ll want to set your drag to the strike position, which should utilize 18-20 pounds of drag. The blue marlin is known to put up incredible fights. While live bait is usually the best option in any offshore fishing, there are artificial alternatives that you can troll at faster speeds than live bait, which could kill live bait.

When trolling, the angler tries to raise a fish behind the boat using hookless teasers. Once the fish is there, the angler drops back a dead bait to a fish raised on a hookless teaser. Bait & Switch is probably the most exciting way of marlin fishing.

Blue marlin, like any marlin, can contain high levels of mercury and marlin aren’t usually known for being great eating fish, but you can eat them. Most anglers recommend only eating blue marlin fresh since freezing them can change the consistency of the meat. Many say that they can be good grilled. All in all, though, the biggest prize of the blue marlin fishing experience isn’t the meat, but the fight to land them.

Fishing in US waters for blue marlin will require an Atlantic Highly Migratory Species Angling Permit. Some states report recreational landings of billfish, and any fish not kept must be returned in a way that ensures their survival as good as possible.

In the Bahamas, billfish are catch and release except for special circumstances.

New South Wales and much of Australia are limited to keeping only one marlin per day.

In Portugal and Spain, much of the marlin fishing is catch and release.