You are here: Home › OUR BLOGGERS › The Best Handling Practices when Catching and Releasing a Fish

How to release a fish correctly, catch and release fishing? Firstly, what you should know about catch and release fishing is that each river, lake or ocean that you fish in has different regulations and laws regarding how you should handle all fish that you catch. There are a lot of things fishermen at all levels can do whether you’re new to the hobby or if you have some experience under your belt. These are the best handling practice tips you can and should share with the less experienced anglers among your group.

The reality could be that you can accidentally kill a fish and even the regulations on how to dispose or keep the fish may be varied by the different states or countries you are fishing in. What you can do is to revive the fish by keeping it in the water. Some of the things that will be discussed below are ways to ethically fish so that you minimise the possibility of accidentally injuring or killing your catch and steps in between hooking the fish and letting the fish go.

How to Prepare for Catch and Release Fishing

The basics of preparing for any kind of fishing starts with paying attention to regulations that are required in regards to how many fish you can catch and what sort of gear you can use. Of course, laws and regulations may get more specific than that in different regions. The variety of laws that are used universally are for all fishing techniques and are done to protect fish species through rebuilding overfished stocks to increase long-term economic and social benefits.

The tackle that would be most appropriate is based on different factors and sometimes there are discernible reasons that you are prohibited to use certain types of hooks and lures. This can be to bring more of a challenge to fishermen and may discourage some people from fishing in certain areas. While live bait fishing is more dangerous when swallowed by the fish as they could swallow the hook whole as well. The use of a rod, reel and strong line to pull in your fish effectively is also best. The shorter the fight, the better. It’s just as important when catching a fish in the most efficient way to keep it alive longer. Using non-stainless hooks will ensure that if the hook is still in the fish somewhere it will eventually fall out or rust away.

Catching And Landing A Fish

The way you land a fish is dependent on what kind of body of water you’re fishing out of. Other things to take note of is being responsible for your rod and line when you cast it out. Doing this will also keep the injury to a fish at a minimum.  For instance, if you cast out into a part of the water where you’re sure there is fish (even if that was hours ago), you should not be looking away from the water. The more you don’t pay attention, the longer it will take to dehook the fish and the longer it will be out of the water. The fish may have built up levels of lactic acid which may also be dangerous as time goes on. 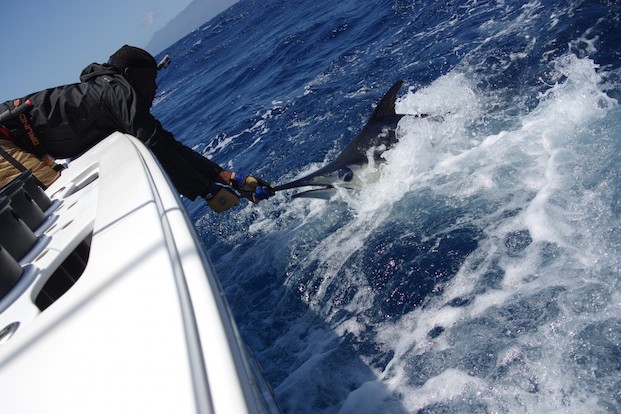 The most important thing to do after catching the fish is to handle it in the water. Especially large fish such as marlin, shark or tuna – unhooking them in the water is the safest way to releasing the fish. The other concerns that may come up are how to protect the fish when handling it. The best thing to do is to have wet hands when handling any fish. This will ensure that they don’t ruin or harm the protective mucus layer of the fish. Provide support for the fish when you are handling it, don’t remove the fish from the water unless it’s absolutely necessary. Another helpful thing for the fish is to not over handle it. Don’t grab a fish by the gills unless it is going to be dinner, as the likelihood that the fish will die from that kind of handling practice increases dramatically. The gills are the fish’s lungs, a very sensitive organ.

When you’re required to handle the fish and remove the hook you’ll have to get the proper tools as I have mentioned before.  Using a pair of needle-nose pliers works but also using hemostats are great because of the adjustability of gripping strength. The best technique is to hold the fish upside down if possible while dehooking the fish.

Even planning on how to take your picture is a good idea. The good prerequisites for this are by keeping the fish floating close to the surface of the water and then adjust the angle where you can get the best shot. Also being able to hold the fish whether it is by gloves or grabbing it right by the tail are the best ways to grab your fish. When you have everything set to the way you want it then lift the fish out of the water to take the picture. Beforehand, you should get the fish comfortable with you handling it though. If you are doing multiple pictures keep the fish calm before each photo. Then you must immediately and carefully put the catch back in the water.

How to Release Your Catch

The key to releasing your fish in the most humane way is to see if the fish has barotrauma. This is an illness which affects any fish that is pulled from extreme depths, according to the environment, and is pulled into surface-level water quicker than it can handle. It also means that a fish cannot swim back down to the depth they were found at due to a build-up of gases in its system. Signs of barotrauma in a fish are bulging eyes, a protruding stomach from the mouth, and a bloated midsection. Other signs are sluggish swimming and lifted scales. A fish will not survive if released and suffering from this illness. Try to fight your catch so that you retrieve a fish from a depth slowly and controlled as this will reduce the likelihood of it suffer from barotrauma.

The best thing to do is to get it to land with a fishing net that is made out of rubber. When you do have it in a net make sure it is ventilating or breathing. A way to see this is to check to see if its gills are moving.  When fishing in fast-moving water move your catch to calmer, slower-moving water if possible. This is especially important when a fish was caught in really fast-moving water which it could get swept away in and get hurt even more. Pay attention to this when fishing from a boat and are trolling around a lake.

The most important thing to do is to enjoy fishing and the privilege of enjoying nature in such a way. If you make what has been discussed in this article your firm guideline of how to fish then the chances of harming or killing a fish will reduce dramatically. Remember the six main topics we discussed above are: