You are here: Home › OUR BLOGGERS › PLACES › After the lockdown, when can we go fishing in Spain?

Spain is slowly lifting the lockdown although Madrid and Barcelona, Spain’s two largest cities, could remain under virtual lockdown as the rest of the country eases its way towards some semblance of normal life. The plan to lift lockdown restrictions has four stages, in which restrictions are progressively eased, with each region applying to enter the next phase if it meets certain conditions, such as hospital capacity requirements.

So, when can we go fishing in Spain? Since last Sunday people can do sport from 6 am to 10 am and from 8 pm to 11 pm, but why can’t we go fishing yet? Spain aims to remove most restrictions on daily life and return to a new normal over the next eight weeks. We’ll soon be able to go tuna fishing again!

When can we go fishing in Spain?

On May 11th, the first phase starts and allows for groups of up to 10 people to meet in homes or outdoors, and street cafes to reopen.

Fishing in Spain will be allowed from phase two. For almost all spaniards, this will be toward the 25th of May. But in areas like Madrid and Barcelona the anglers will have to wait a little longer. Officials state there is still a moderate to high risk of a new wave of infections in these areas to pass on to phase 1 this Monday.

What about boat fishing in Spain?

So, by the end of this month, if the numbers are still good, fishing will be allowed. But anglers wanting to go boat fishing and people who’d like to book a fishing charter will have to take into account the regulations from the Dirección General de la Marina Mercante, part of Spain’s Department for Transport . In phase one, sailing is allowed again, but in very reduced numbers and fishing isn’t allowed. After the 25th of May, with the start of phase two, boat fishing is allowed but you have to stay in your province. We’ll have to wait until mid June, when phase three starts, to be able to navigate between provinces. 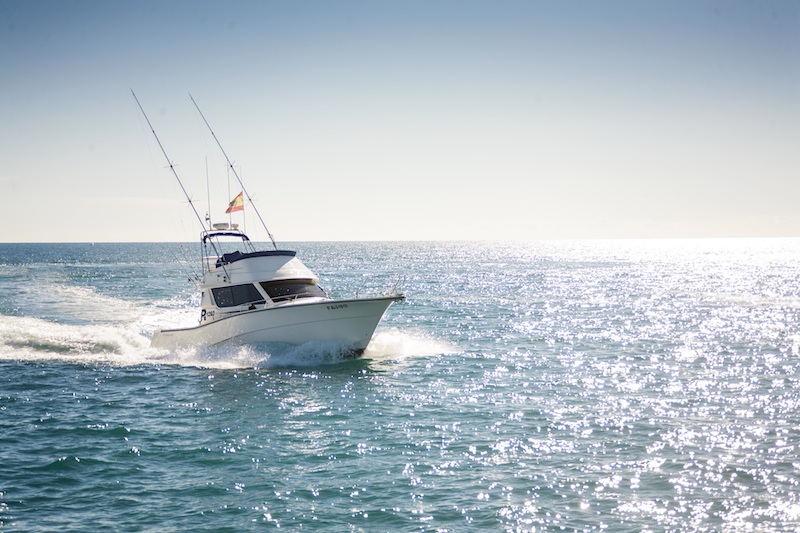 Although it’s taking too long, we’ll be very happy with the lifting of the coronavirus restrictions on angling and other low risk outdoor activities. Maintaining social distancing on the pier, on the beach, on the river bank or on your boat won’t be too hard.

As the Spain enters it sixth week of lockdown, conservationists say they have seen some hidden benefits of the restrictions in the natural world.

With practically now boats on the sea (only professionals are allowed on the sea), no jetski and nobody on the beaches, scientists say there could be gains for the fish. We spot large seabass in the ports, we observe massive frenzies very close to the shore and dolphins are patrolling the beaches and even the ports, like these dolphins feeding in Barcelona!

When will it be possible to travel to Spain again?

There is very little official guidance on when tourists will be able to visit Spain again and lots of speculation. Many customers have been asking this question and while we don’t have a clear answer, here’s what we know so far.

Phase three will start towards mid June, so before this date the borders will stay closed. Although there have been speculations about not allowing foreigners until October, we know major airlines are starting to offer flights to Spain from mid June. The information changes every day and things will depend a lot on the evolution of new cases, the number of deaths and the overall situation in the hospitals. The situation in other European Countries will also affect the situation: Belgium has closed its borders until the 5th of June, France announced last Thursday it would not open the country before the the June 15.

What is clear though is it is going to be quite a while before we can expect normality to return to the tourism industry which accounts for some 12 percent of Spain’s GDP and employs 13 percent of its workforce.

We all hope people from abroad can come to Spain soon!