You are here: Home › OUR BLOGGERS › Mahi Mahi Fishing: All you need to know

Dorado, Mahi Mahi or Dolphin fish… different names for the same fish. Known for their bluntly shaped heads and their bright colouring, Mahi Mahi is a very strong and hardy fish. Actually, The name mahi-mahi comes from the Hawaiian language and means “very strong”.

They can be caught in large schools and will put up an excellent fight on light tackle. This makes them very popular with recreational fishermen, big game anglers, and spear fishermen. They are also considered one of the best eating fishes around. The world record mahi-mahi was caught off the coast of Venezuela and weighed in at 128 pounds (58 kg). Capt Jose Wejebe landed it during the filming of his TV series “Fishing Impossible” near Cocos Island, Costa Rica, on Feb 4th, 1999. 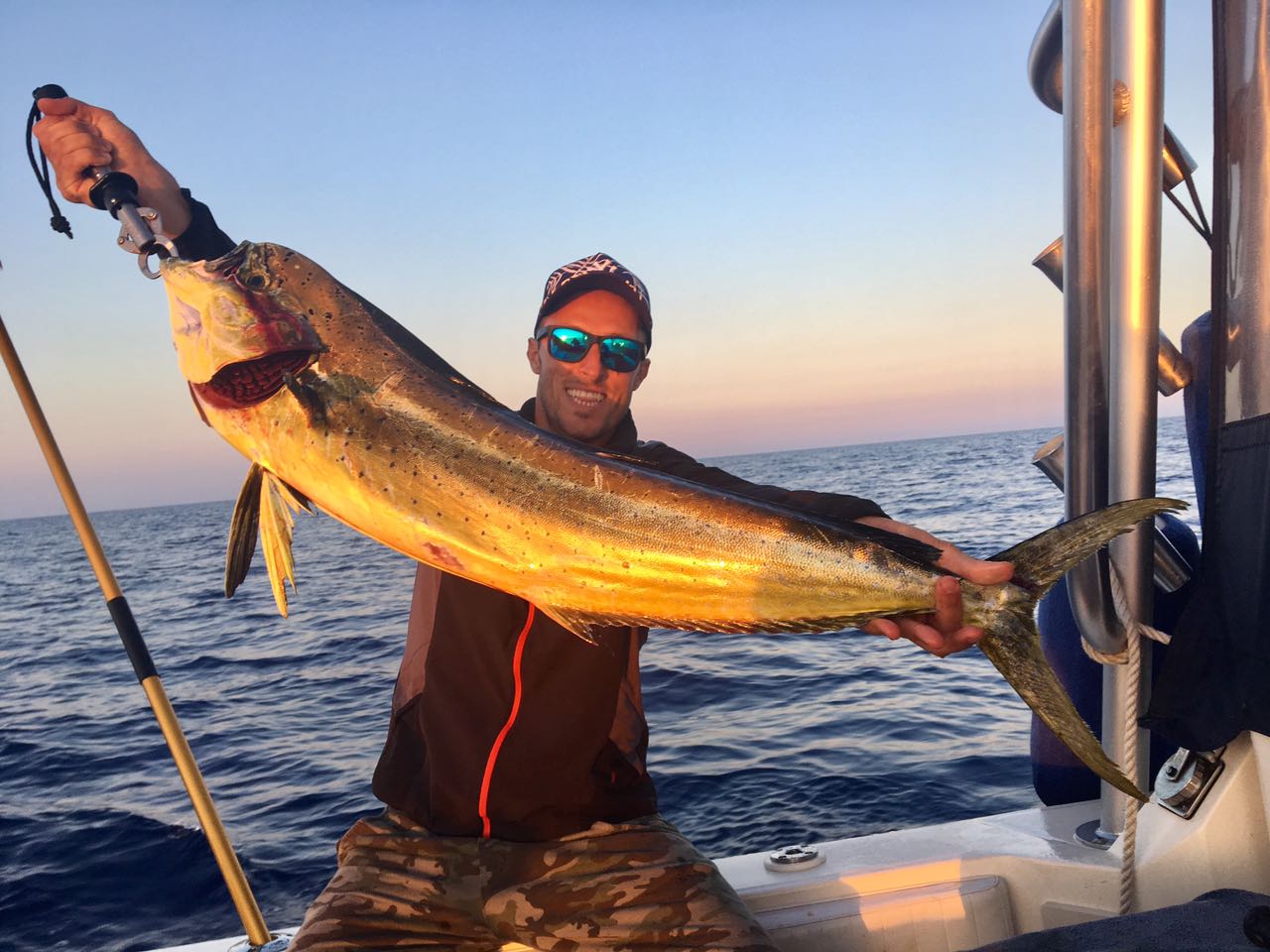 Where to fish for Mahi Mahi

Distributed throughout the tropical and subtropical waters of the Atlantic Ocean, Pacifico Ocean, Indian Ocean and the Mediterranean Sea, mahi mahi prefer waters between the surface and around 80m deep.

Mahis like to hang around floating objects such as debris, flotsam, or spinnakers blown out of position by the wind. They are also found around floating islands of grass and in channels where a strong flow of water runs through them. The mahi-mahi’s diet consists mainly of small fish and squid.

A good time to catch mahi-mahis is during their spawning season, which often takes place between February and June near cut banks or drop-offs where they like to go at night to feed on the small baitfish that gather there. Other preferred Mahi habitats include turtle grass flats (Thalassia) 30 to 40 feet deep with slight currents. Wrecks show surface activity such as debris, oil slicks or bubbles, rocky bottoms with ledges on steep banks, and floating debris. These fish will often travel far offshore and can be found in waters as deep as 800 feet (243 m).

Mahi-mahi prefers water temperatures between 72 and 79 degrees Fahrenheit (22 to 26 Celsius). When they are found close to shore, they tend to remain well inshore of outlying reefs, ridges, or shoals rather than around the reefs themselves.

Mahi-mahi are often caught as a side catch when tuna fishing or marlin fishing. 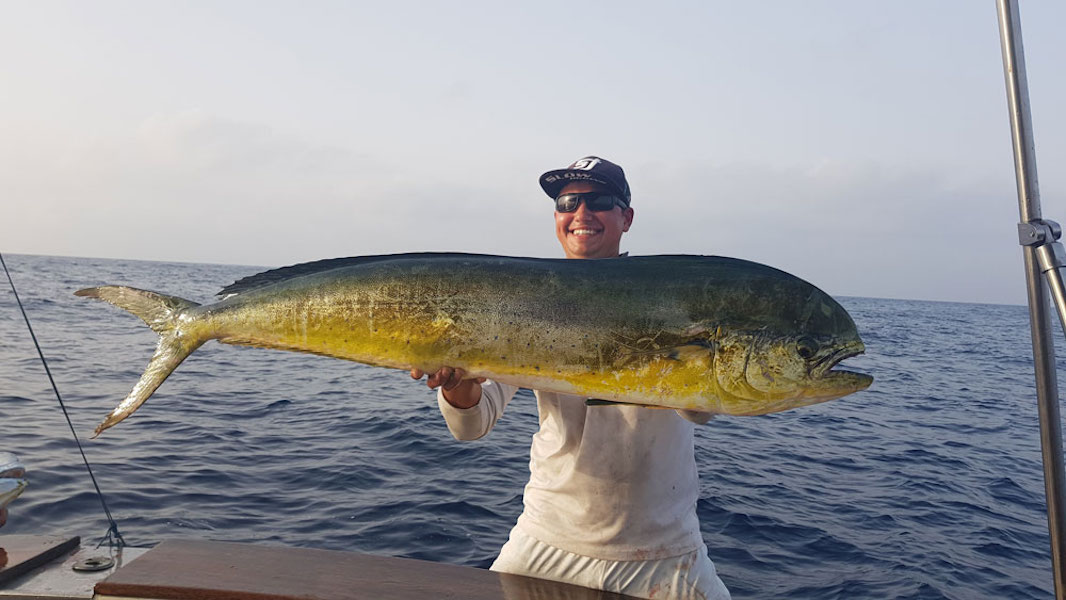 Mahi-mahis are aggressive fish that will bite almost any lure fished trolling, jigging or spinning. Live or dead bait are also great to catch one of these hard fighting gamefish! Popular baits include live or dead small fish such as mackerel, pilchards, jack, needlefish, and other species that inhabit the same waters. A good choice is hooked ballyhoo on a 3/0 to 5/0 hook with a weight tied close to the hook’s eye to keep it from tangling in the loose baitfish inshore. If you are using frozen shrimp for bait, try using a 2 1/2 inch jig head to present your offering.

When casting or trolling with these baits, work them for several minutes before stopping, so the mahi-mahi gets used to it being there. When fishing deep (over 100ft), you can use both natural colors (white or yellow) and fluorescent colors (chartreuse, fluoro pink, fluoro yellow) in the mornings and evenings when the sunlight is low. 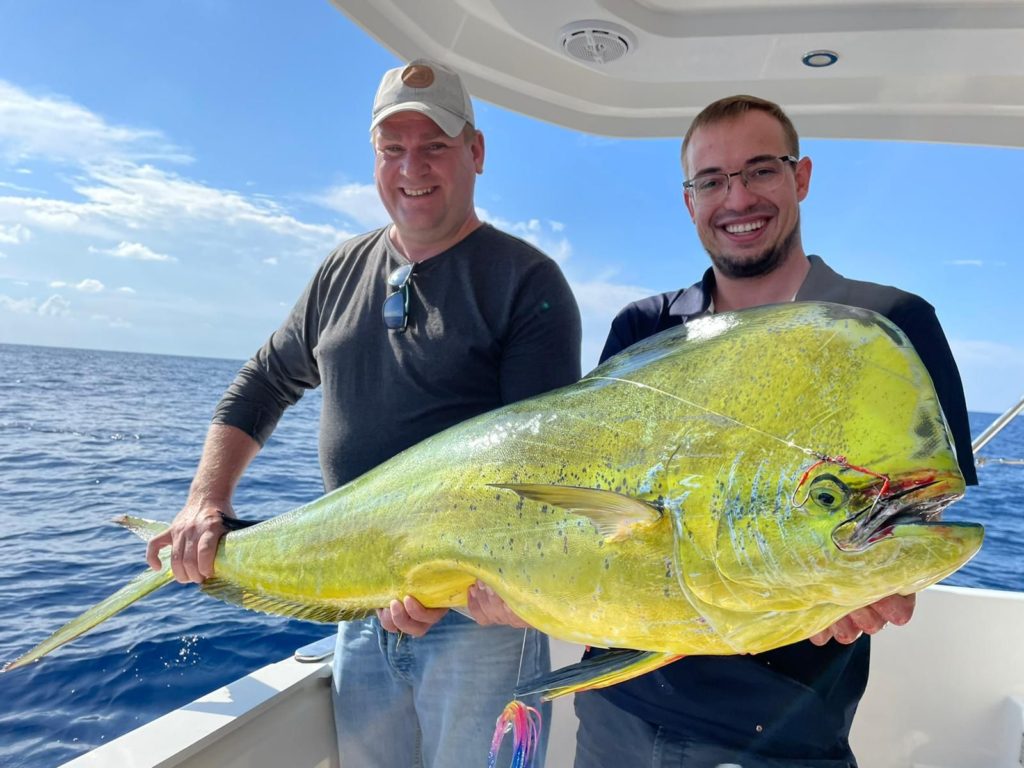 When fishing for mahi-mahis during their spawning season, they can be very aggressive towards any large baitfish that swim into their area.

A couple of interesting facts about mahi-mahis: they are also known as dorados which means golden in Spanish, and they actually do jump straight up out of the water when hooked! However, their most common nickname is “the flying fish” due to their ability to leap vertically out of the water, often several feet high. If you would like to catch one of these popular gamefish yourself on your next fishing trip, why not book one of our mahi mahi fishing charters? 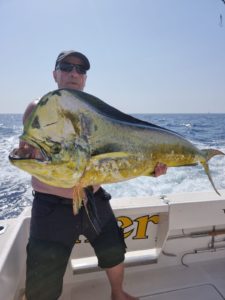 Mahi-mahis are often seen in small groups traveling in an area called a ‘school.’ This school may hold anywhere from two to several hundred fish. They swim along near the surface together with their mouths open to filter out plankton.

Mahi Mahi fishing can be done in Mexico, Florida, Guatemala, Dominican Republic, Canary Islands, Cape Verde, Senegal, Madeira, Spain, Italy, France, Australia, Madagascar, Tahiti and a long etcetera. Mahi-mahis are also one of the trophy fish in Costa Rica, Panama and Brazil for example. They are found worldwide in tropical waters and are mostly fished for the sport.

Their fighting ability is second to none, so if you catch one of these fish on a hook, you can imagine how much fun they would be on a fly rod!

Have you ever caught a Mahi Mahi? What was the biggest? Share your comments below!