For us fishing enthusiasts, fishing in Marbella is the best outdoor activity you can do in this lovely village. Situated on the Mediterranean coast between Málaga and the Straits of Gibraltar at the foot of the Sierra Blanca, Marbella is known for its warm Mediterranean climate, its nighlife and its 26 wonderful beaches, stretching over 27.9km of coastline.

Inshore you can fish for reef fish such as snapper, seabream, jack, scorpion fish and nice predators like dentex, amberjack, seabass and pink dentex. Offshore, from April to October, massive tuna, skipjack and white marlin can be caught drifting or trolling.

Marbella is probably one of the best places to combine family holidays with sport fishing. 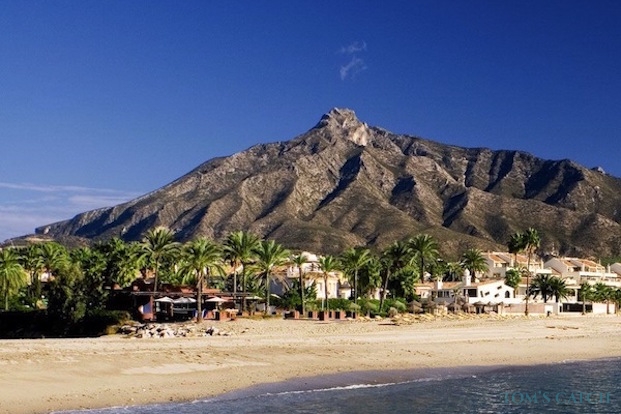 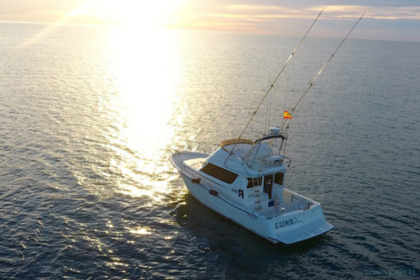 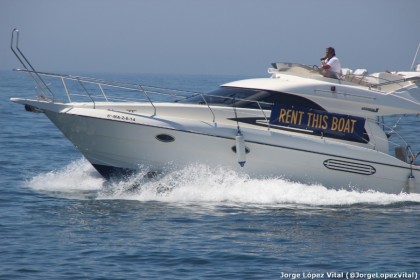 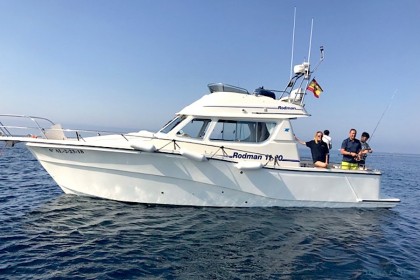 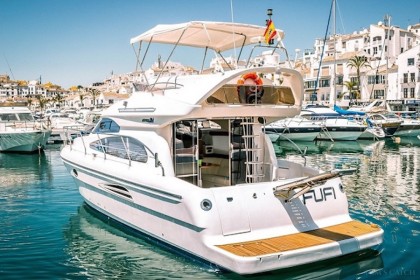 Fishing in Marbella is a pleasure for all fisherman, who can enjoy the four ports of the most iconic city of the Costa del Sol. These ports are: Puerto Virgen del Carmen (located downtown near shops and the beach, offering a yacht club and a professional scuba diving school), Puerto Banus (a luxury port with 1000 moorings), Puerto Cabopino and Puerto Marina la Bajadilla.

The pink dentex (pagrus auriga) is usually quite large (90cm) and can weigh 11kg or more. Its colour is usually pink at the time of capture and gets more red later.

The species is caught mainly in rocky or mixed areas of sand and rock, normally not deeper than 200m. The best fishing techniques to target the pink dentex are trolling live bait with downrigger or vertical jigging with rubber bait, inchiku and long blades. You can catch this species practically all year round, but February and March usually offer the best months to catch this sought after species.

In Marbella, dentex can be found between 0 and 200m deep, with the young closer to the shore and the old out deeper. Dentex feed mainly on fish, crabs, molluscs and their favourite, squid. Trolling or drifting with live bait with downrigger or vertical jigging with rubber bait, inchiku and long blades. You can fish dentex practically all year, being April and May the most productive months to catch them.

Bluefin Tuna (thunnus thynnus) can weigh up to 500kg (1000lb+), making it one of the most wanted species in Marbella. Tuna are targeted chumming natural bait or trolling artificials offshore in waters with more than 500-1000 meters depth in the Alboran Sea and the Straits of Gibraltar. The fish arrive early spring from the Atlantic Ocean and migrate towards their spawning areas in the Mediterranean Sea. The best tuna fishing in Marbella is from April to September. In March and April, tuna - especially younger fish, come closer to shore and can create spectacular frenzies. In these situation it's great to start casting poppers, stickbait and jigs towards the frenzie hoping one of the predators attacks it.

For spinfishing for tuna, we recommend the use of a good reel (Saltiga 4500 or 6500 type or Stella Daiwa 18000-20000 Shimano, for example), an adecuat robust spinning rod and strong braided lines 60lb-80lb, because the fight with a bluefin tuna may extend for over an hour easily.

The grouper fish camouflages perfectly to the seabed. The best technique to catch this fish in Marbella is fishing live or dead bait close to the bottom, in rocky areas such as the Las Bovedas reef. Trolling slowly with the help or a downrigger or drifting would be the best way to target Grouper in Marbella and the Costa del Sol. They can be found all year round.

The young bream are located closer to the coast in shallow water and they swim grouped together in large schools. As their age increases, they live in deeper and sandy places. Fishing black spot sea bream in Marbella is done chiefly in winter, and in deep waters (which means between 200 and 400m deep). Electric reels are of great help here.

Offshore trolling and spinning can be practiced from April and May. Using these techniques we can fish bluefin tuna, albacore and little tunny. Drifting or anchoring the boat you may catch dentex, grouper, jack, scorpion fish, seabream and snapper on the reef.

During the summer months, tuna fishing in Marbella is mainly done trolling and chumming. Tuna are normally found off-shore in the Alboran Sea, 30 miles off shore; and in the area of the Strait of Gibraltar. In the Straits, due to the strong currents and the heavy maritme traffic, only trolling artificials is possible. When the weather conditions are right, chumming sardines and mackerel is a great way to catch tuna.

This is an excellent season for inshore trolling with small lures and feathers to fish various species such as bonito, mackerel, little tunny or dolphin fish. Reef fishing in Marbella during fall is great to target seabream, snapper, jack, conger eel, scorpion fish, dentex...

The winter is ideal for deep sea fishing and bottom fishing in Marbella. With deep sea bottom fishing,  a wide range of species such as blackspot seabream, codling, conger eel, grouper, snapper and hake can be caught. February and March are usually very good months for fishing the bigger pink dentex deep trolling with natural bait. This technique is also good to catch grouper, dentex and amberjack.

In any season, deep sea fishing or reef fishing in Marbella will be the best technique to bring fish on board.

Nobody is a foreigner in Marbella. This cosmopolitan town, with all the charisma of a large city, is home to 137 nationalities.

Marbella, one of the best places in the world to live, is famous for its internationally renowned and privileged climate. The annual average temperature is around 18.5º C, with 320 days of sunshine a year. Weather forecasts do not suggest any significant changes and the rain here does not usually exceed 50 days each year, December and January being the time of year with the highest precipitation.

This climate is due to its unique geographical situation, namely the mountains which surround Marbella, the Sierra Blanca and the Concha, visible from the entire area. Allied to the position of its coastal inlet, the effect is to shelter the town from the northern winds, allowing it to enjoy a special microclimate unique in the world and one which has become one of its great tourist attractions.