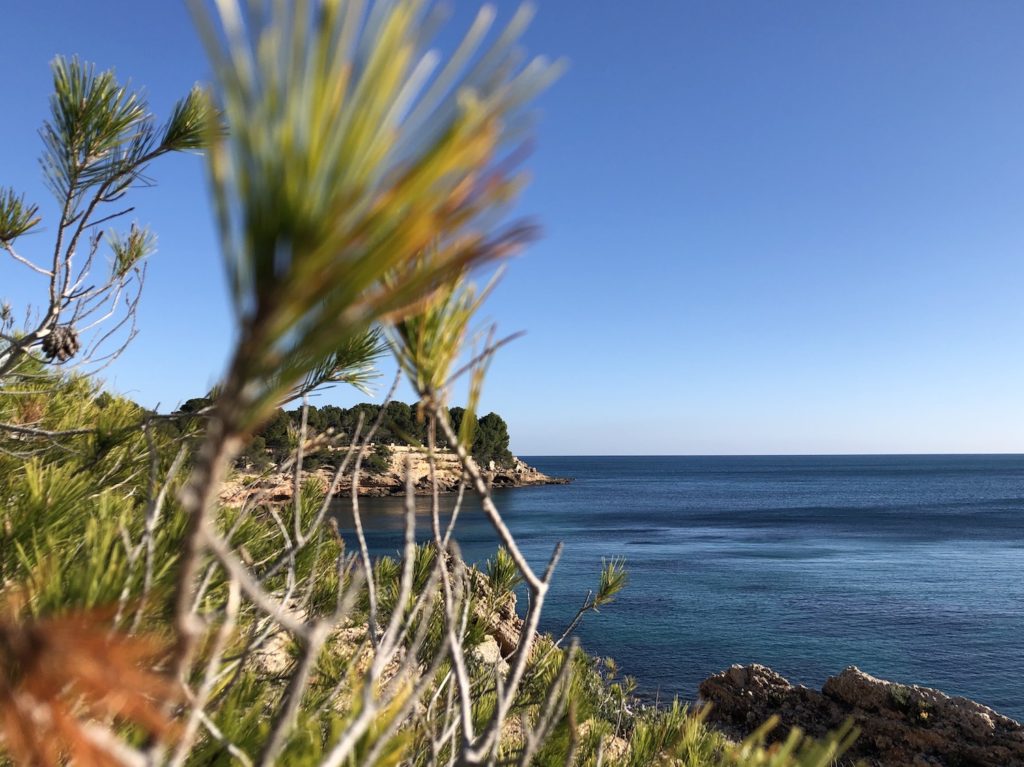 When you imagine turquoise-blue waters, secret coves and soft golden sands, you’d think of Mallorca or Formentera… But did you know you can find these also in L’Ametlla de Mar? This unspoiled fishing town is the hidden jewel on the Costa Dorada in Catalonia, Northern Spain. Named after the famous almonds of the Baix Camp region, it has a stunning coastline with amazing bays and coves. Check out what the sport fishing in L’Ametlla de Mar is like below. 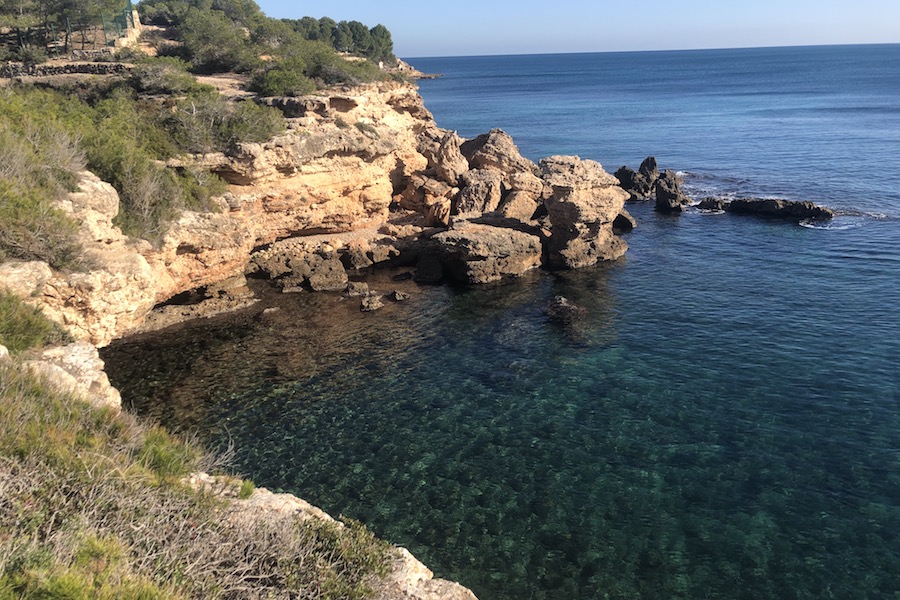 All year round there is good fishing in l’Ametlla de Mar. The waters off l’Ametlla de Mar are home to all sorts of predators. Bluefish are around all year round although they’re more prolific from April to November. May and June are the best months to target Leerfish trolling natural bait or casting poppers, stickbait and other top water lures.

Seabass chase baitfish near the bays, the rocks and the coves. A little deeper the Dentex will be patrolling close to the rocky bottom. The best way to fish for Dentex is using jigs or using a life squid on a nylon rig. 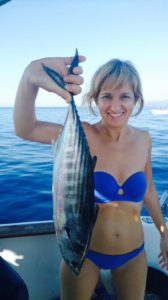 Bonitos can be caught mainly between April and November. August and September are the best months to target them chumming. The locals drift in waters of around 50m deep and chum sardines to attract them. Bonitos are amazing fighters and weigh between 2 and 5 kg. This time of the year the dorado (mahi-mahi) visit these waters.

L’Ametlla de Mar is very close to the Ebro Delta. Apart from being considered one of the most important wetlands in the Mediterranean Coast, this is a fantastic fishing area. The River Ebro flows into the Mediterranean Sea bringing loads of natural food for sardines, anchovies, mullet etc. The bait fish are the favorite food for Seabass, Bluefish, Leerfish, Amberjack, Bonito, Tuna, Little Tunny or Dentex.

L’Ametlla de Mar is famous for everything involved with tuna: tuna fishing, tuna farming and tuna industry. The beach of Almadraba (Platja Almadraba) is proof of its tuna history: the Almadraba is an old technique for trapping bluefin tuna with nets close to the shore. This spectacular technique hasn’t been used for a long time in L’Amettla de Mar but it’s still carried out in Southern Spain, Italy, Portugal and Morocco.

Traditionally the professional fishermen also used to catch the bluefin tuna with hand lines during the month of April and May. They would sail off shore, passed the continental shelf and fish for bluefin tuna chumming with sardines and mackerel. In the afternoon, the fishermen would bring the tuna (as well as massive amberjack and fox shark) and expose them in the intense fish market. In the 80’s you would see 2-3 Japanese buyers among the Catalan fishermen. With a small knife they would cut a piece of raw tuna and taste the fish. According to their findings, they would negotiate the price of the fish and ship it to Japan.

The tuna industry has changed a lot and nowadays, L’Ametlla de Mar has one of the largest Tuna farms of the world. Huge vessels catch the bluefin tuna with nets around the Balearic Islands in May and June. They keep them alive in these nets and troll them back to L’Ametlla de Mar where they’re transferred into giant underwater cages. Here, they’re fattened up with sardines, mackerel, anchovies until they’ve reached the right size. A large portion of these fish will be shipped to Japan and United States.

Around these giant underwater cages, there’s a stable population of wild tuna living all year round. Giant Bluefin Tuna can be caught chumming sardines around these cages, which are located only 2-3 miles off shore!

During the tuna fishing season, the fishing charters head to the fishing grounds with 50-70kg of sardines or mackerel for chumming. The hook bait can be a larger mackerel, horse mackerel (dead or alive) rigged on a single hook. The boats drift along the cages fishing with big game fishing gear (80lb Shimano Tiagra, Alutecnos, Avet…). Although most fishing boats feature one or several fighting chairs, stand-up tuna fishing in L’Ametlla de Mar is getting more and more popular.

In April, May and during the summer months bluefin tuna can be caught on heavy spinning gear. Captains fish on smaller, faster boats that make chasing and keeping up with fleeing tuna possible. Large frenzies appear off l’Ametlla de Mar in waters of 70 – 90m of depth. Anglers target their tuna, using a variety of jigs, large poppers, stick-bait and other tuna lures.

“It didn’t take us long to spot birds. High flyers at first, soon they all turned, dropped and focused on one particular point in the water where large fish suddenly began to feed. Once in range, I powered down and yelled “cast!” A stickbait quickly landed just past the surface commotion. A single sweep of the rod and the lure was in the zone. It sat motionless for a second, but one twitch and kaboom! The rod doubled over and the reel screamed, yet the tackle proved up to the task, and, 15 minutes later, we landed a 60lb Tuna.” John 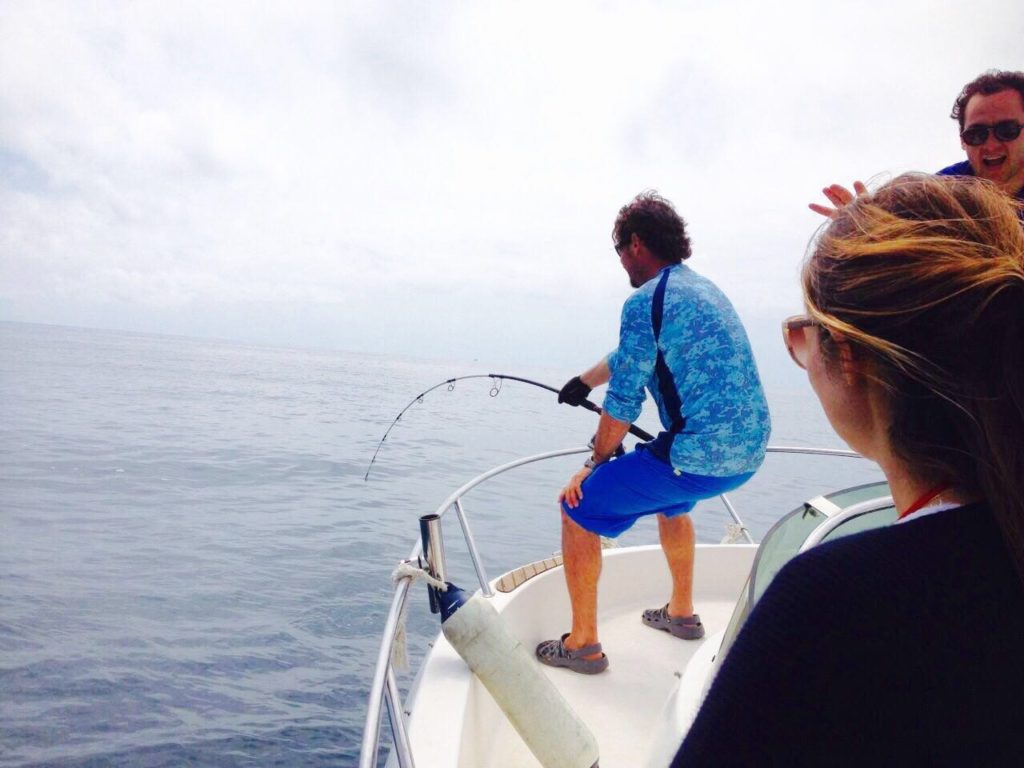 They approach the frenzies gently to not scare the fish. If you make too much noise the tuna will disappear into the deep. Once the anglers get into casting range, they start casting towards the feeding tuna. With serious tuna tackle a fight with a tuna lasts between 20 min and 1 hour. The most popular reels are Shimano Stella 14 000 – 20 000, Daiwa Saltiga 6500 or Dogfight, Van Staal or Penn. Arm yourself with the right gear! 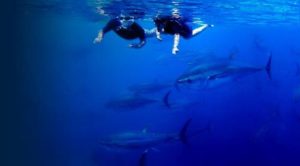 Swimming among bluefin tunas is an experience not easily forgotten. With the Tuna Tour company, you can experience this fantastic experience with your family. The boats leave from the port of l’Ametlla de mar to the natural pools that are within 5 km. During the trip, you will enjoy the beautiful scenery of the Delta del Ebro and an explanatory video on bluefin tuna and its marketing processing. Once in the pool, dive into the sea to swim between these large animals.

The Costa Dorada is home to some of the best and longest beaches in Spain. From sandy coves to pebbled beaches, it’s not hard to find a beach in Cambrils, Salou, l’Hospitalet de l’Infant, l’Ametlla de Mar and l’Ampolla to suit all tastes. The hot climate, cooling sea breezes, lively resorts and excellent beaches are what make l’Ametlla de Mar and its surroundings an ideal holiday destination.