You are here: Home › OUR BLOGGERS › The Ugliest Fish In The World

The fish that inhabit the deep ocean are some of the most bizarre and ugliest fish in the entire world. These fish have many strange and unique characteristics, having adapted to a lifestyle of pitch darkness, crushing pressures, and frigid temperatures. Some fish have evolved special organs that allow them to produce light to attract prey or elude predators. Some species lack eyes entirely or have elongated bodies covered with bony plates.

Much deep-sea fish have in common is their appearance which is often weirdly shaped with bloated bodies covered in hideous warts and asymmetrical features that look like a blind person put them together.

This list includes 10 of the ugliest fish in the world you will ever see but be warned: looking at their pictures will haunt your nightmares for weeks. 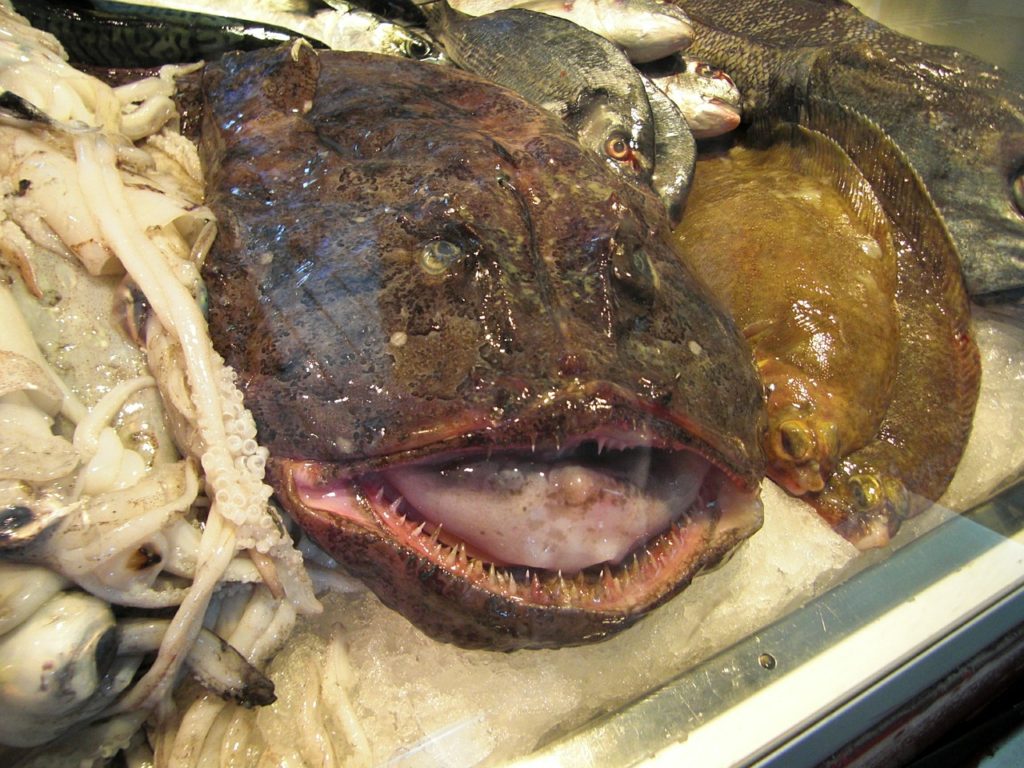 The Monkfish isn’t a beauty, but very good eating!

This fish is found at depths of 1,000 feet to 11,500 feet in the North Atlantic Ocean. It can grow up to 3 feet long, and its wide mouth is used to trap prey, including small fish and invertebrates.

Once an unsuspecting meal swims inside this monster’s cavernous maw, it has no chance of escape because the bigmouth sleeper snaps it closed using a special muscle that pulls its lower jaw into its body cavity.

The name “Big-mouthed” perfectly describes this deep-sea predator, but unfortunately, there are very few other facts known about it because humans have rarely seen it due to its preferences.

Bristlemouth fishes are found at depths of 650 to 10,000 feet and can be recognized by their enormous mouths with thick lips tipped with a small barbel. The bristlemouth’s upper jaw contains a series of short, fang-like teeth that help it catch its prey: plankton and other small animals that float in the water.

These fish grow up to 1 foot long and have large eyes, but not much is known about them since they live in deep waters where humans rarely go. Deep sea fishing you won’t catch them neither.

The viperfish may look like something straight out of a horror movie, but these creatures are authentic and can be found living in the temperate and tropical season on both sides of the Atlantic ocean from depths of 100 to 1,000 feet.

It is a scary-looking fish with a large mouth full of needle-sharp teeth and a long body covered by bony plates that give it an alien-like appearance. The viperfish’s most unique feature is a light organ located below each eye, allowing it to produce light and illuminate its prey at night. 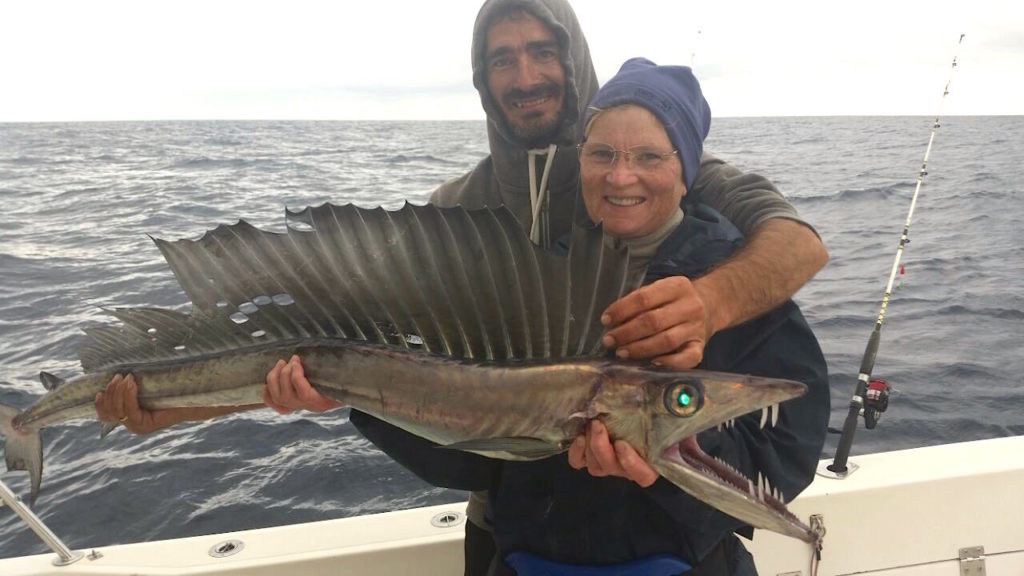 The hatchet fish lives at depths of 300 feet to 1,500 feet where food is scarce. This deep-sea predator has evolved an unusual way of feeding itself called “ram feeding,” which involves swimming quickly up from the ocean floor toward small creatures like shrimp larvae hanging mid-water column.

These blind fish are almost completely transparent because they are poor eaters, not requiring much nourishment providing them with an evolutionary advantage by allowing them to be less visible to predators while also allowing divers using cameras to get crystal clear images.

The Fangtooth fish has the most prominent teeth of any other fish in the world, which are so big they can’t even fit inside its tiny mouth! This deep-sea creature is found at depths between 1,500 and 3,000 feet and grows to be only 6 inches long, but that’s all it needs since it doesn’t need to eat very often due to its sluggish metabolism.

Its large eyes recognize the Fangtooth, lack of scales, and bizarre-looking face, which some have compared to a goblin shark or alien creature.

The Barreleye was only recently discovered after one accident near California when commercial fishers were catching other species. This creature is found at depths of 2,000 to 4,300 feet. It has an unusual transparent head that allows scientists to look directly into its massive black eyes without seeing the rest of its body.

The Barreleye uses its giant eyes to spot prey like other deep-sea animals because dim light can’t travel far below the surface, where water pressure would crush most other creatures.

The Gulper Eel gets its name from the way it feeds by opening its enormous jaws wider than any other fish on Earth (reaching up to 39 inches wide) before quickly swallowing whatever poor creatures are unlucky enough to come close to it, including whole squid, fish, and even other eels!

Don’t let their small body fool you. These creatures can open their mouths up to 164 degrees, twice as wide as most other fish. 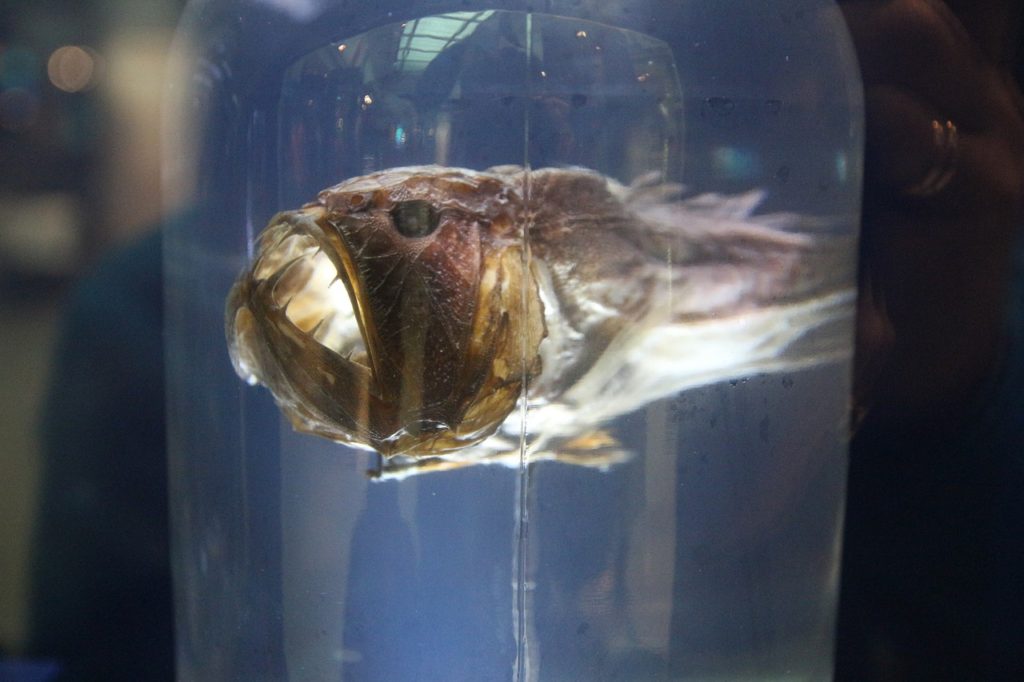 Is the Anglerfish the ugliest fish in the world?

The Anglerfish is one of the ugliest and scariest looking fish in all of the seas because of its sizeable bony head, massive teeth, and tiny parasitic male that has evolved into a tiny useless appendage to keep it from being eaten while mating.

The female deep-sea predator uses a light on its forehead to lure prey close enough for it to open its enormous jaws and swallow whole. 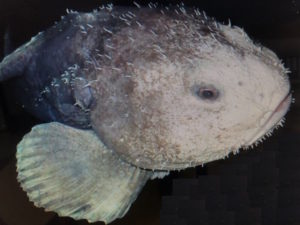 Although the Smithsonian Magazine doesn’t agree 100%, the Blobfish (Psychrolutes marcidus) may be the ugliest animal on Earth because of its sloppy appearance. Complete with orange warty skin covered in nasty white boils, which are cysts full of fluid because this fish doesn’t have any scales protecting its skin. In his natural habitat deep down below, this fish actually doesn’t look ugly at all. After pulling it up rapidly the fish gets this blobby image.

These creepy creatures are found at depths between 600 and 1,200 feet, where pressure is 20 times higher than on land, making their jelly-like bodies collapse under the slightest bit of pressure.

This deep-sea creature has evolved not to need very much food because it can survive for long periods without eating due to its lazy lifestyle, so it only needs enough nourishment to survive. The Blobfish was voted number one by Animal Planet’s “10 ugliest animals” list, but I think it deserves the title as the ugliest animal on Earth!