You are here: Home › OUR BLOGGERS › Quick Guide: Albacore vs Yellowfin Tuna

Albacore and Yellowfin Tuna both belong to the tuna family, just like Bluefin Tuna, Skipjack Tuna, Atlantic Bonito, Black Tuna or Bigeye Tuna. Known for their exceptional strength as well as being very tasty fish, at first sight they might all look very similar. But there are some important differences between the Albacore and the Yellowfin Tuna. In this article you’ll learn the differences between these two fantastic pelagic species.

Albacore & Yellowfin tuna look similar, especially if they’re of the same size. But there are a few things that set them apart.

Yellowfins have a very dark metallic blue body, changing to silver on the belly, which has about 20 vertical lines. Around the lateral line the fish is yellow-greenish. Albacore have a dark blue on the back with dusky to silvery white coloration along the sides of the belly. 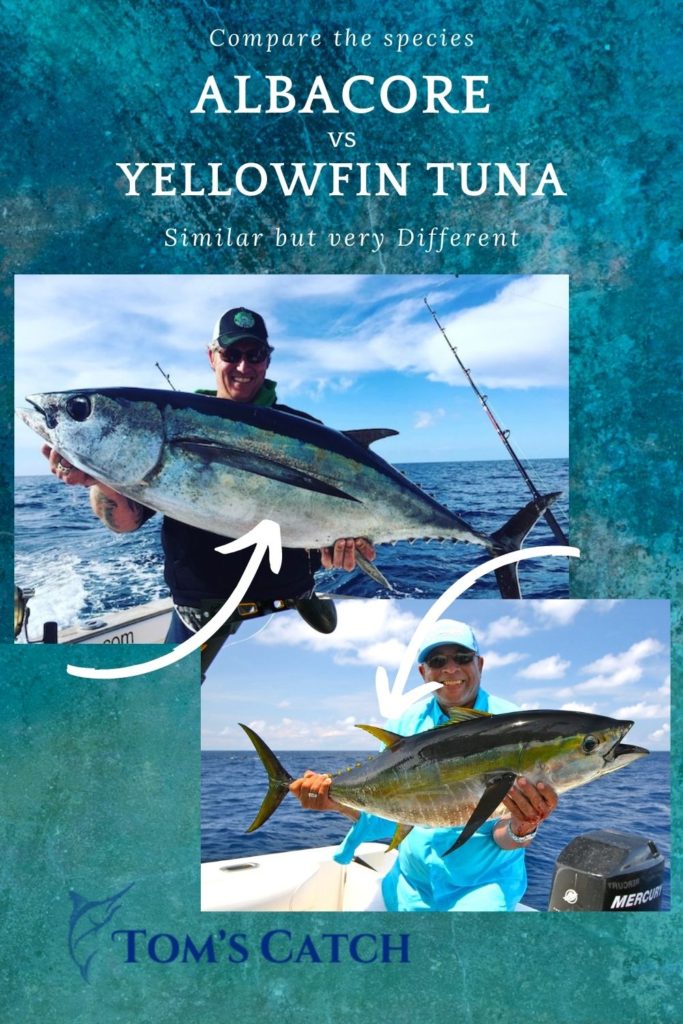 Albacore and Yellowfin are widespread and common species in tropical and temperate waters around the world. Although Yellowfins might be found in deeper areas, these fish species can be found in the same schools. 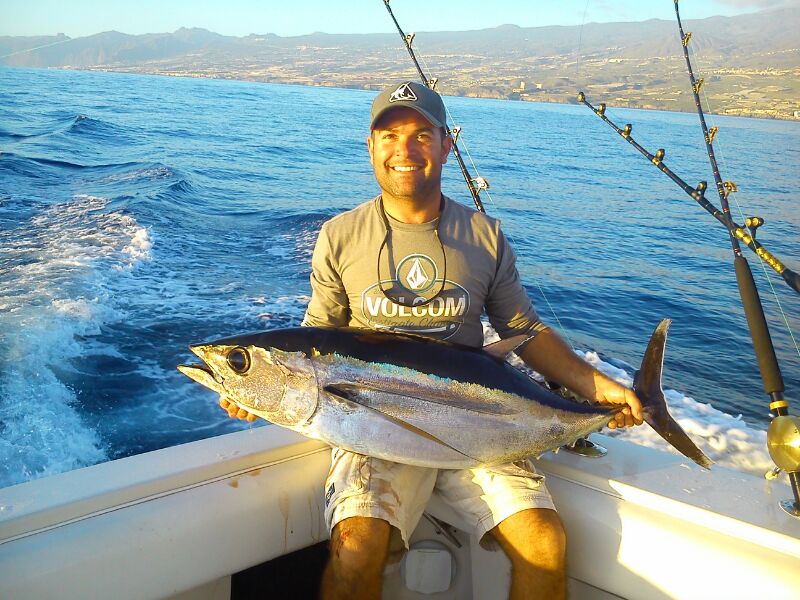 Albacore can be found in the Mediterranean Sea, Atlantic, Indian and Pacific Ocean.

In the U.S. & Canada, albacore are generally caught off California, Oregon, Washington and British Columbia between June and October. August and September normally are the best time of  year for albacore fishing.

The best time for albacore fishing in the Canary Islands is March, April and May. These months they can be found mixed with bluefin tuna and bigeye tuna. Albacore can be caught until October or November in the Canaries. Further north, you can find them around the Bay of Biscay (where they’re called “bonito del Norte) as well as the Mediterranean. Japan and New Zealand are also great places to catch Albacore. 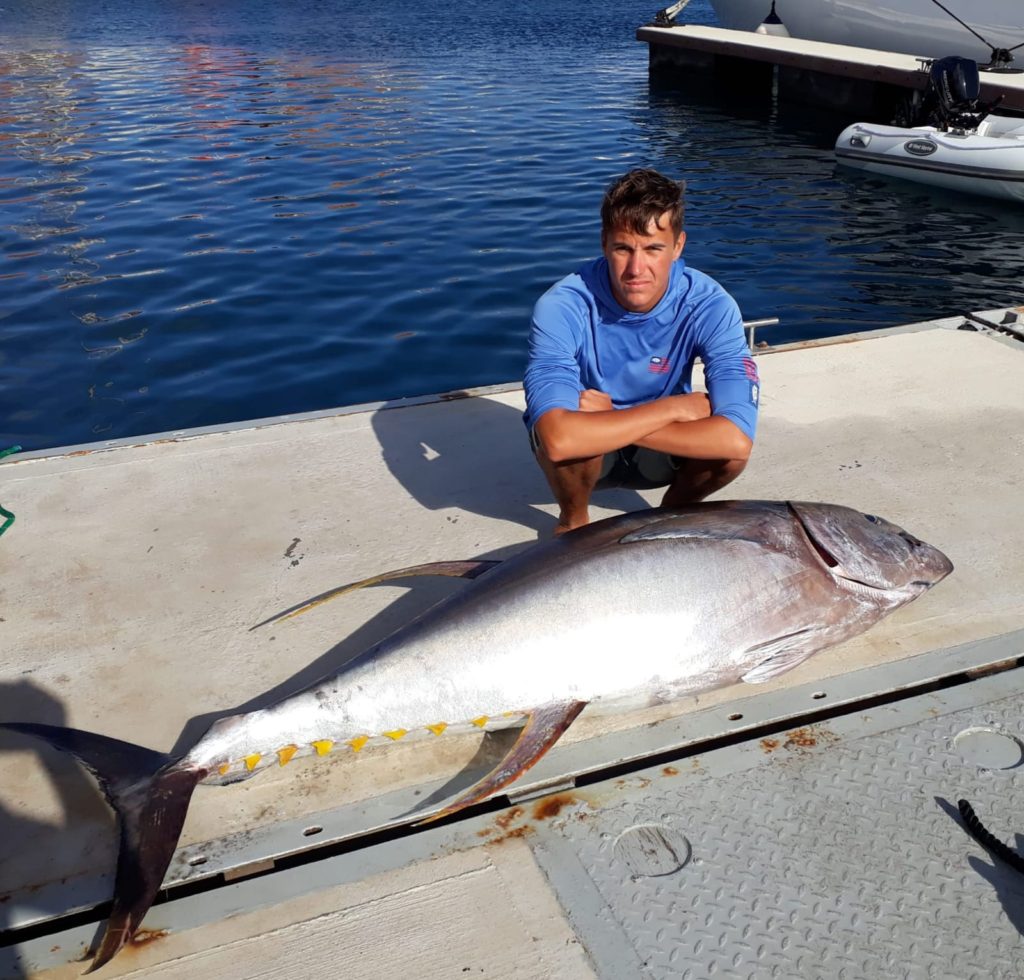 You can also find more information on the best tuna fishing places in the world in our related blog post.

How to catch these tunas?

Once they are located they can sometimes be brought next to the boat by chumming small baitfish. At that point they can be targeted with baits or lures. In the commercial fishing industry, this is how the Albacore are caught one by one with the sustainable pole & line technique.

Yellowfin tuna can also be targeted popping in top water. Off-shore, look for life: frenzies, whales, birds and bait fish. Start casting poppers such as Madd Mantis Atasi Popper, Shimano Orca, Williamson Popper Pro and Yo-Zuri 3D Popper. These poppers, surface jerkbait and crankbait jigs are a must in your tackle box for popping for Yellowfin tuna. The more water they push, the better. There is nothing more exciting than getting caught off guard when a yellowfin crashes your plug without warning. 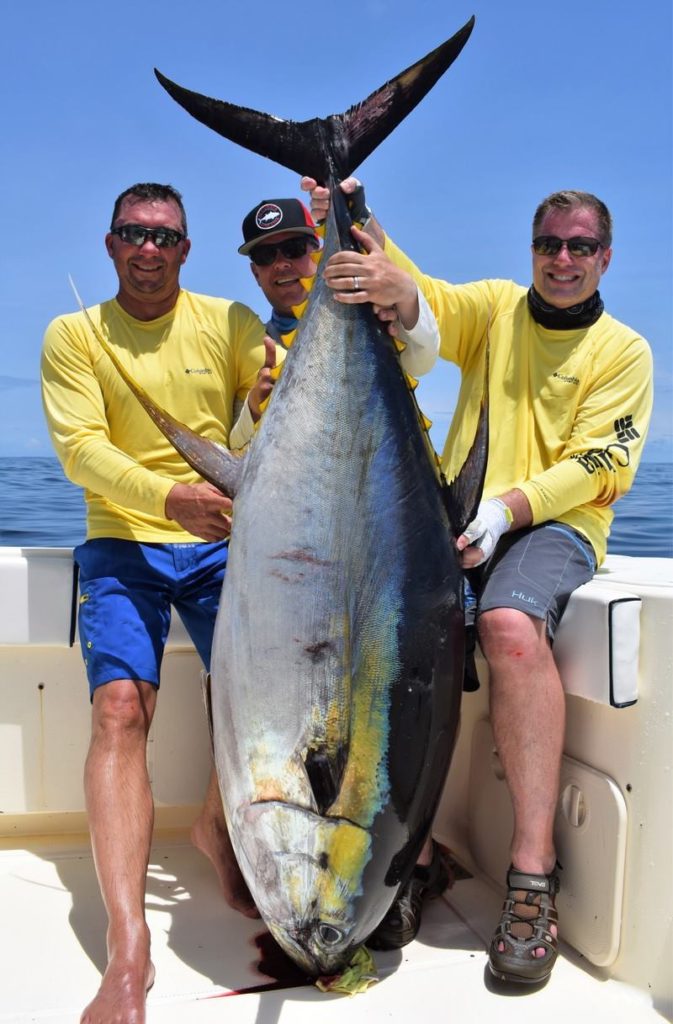 Albacore and Yellowfin tuna are both prized for their flesh. The taste of these species is slightly different.

With a firm texture and mild flavor, yellowfin tuna often appears on restaurant menus. Its taste is a little stronger that Albacore. For this reason, this fish species is used more often for sushi than Albacore.

Yellowfin tuna are great eating fish in moderation, due to their known higher levels of mercury. It’s a great low-calorie source of protein and has no carbs, fibre, or sugar. They are high in niacin as well, an essential B vitamin.

The Albacore is a very good eating fish. The have firm meat, very popular in the finest cuisines. They have the mildest flavor. Albacore can be a good source of heart-healthy omega-3 fatty acids.

Widely used for canned tuna, albacore can also be used for sushi. Other great ways to eat albacore is grilled or Pan-Cooked combined with a citrus-ginger sauce or an oriental sesame sauce for example.

The origin of the word Albacore?

There has been quite some confusion around the name Albacore. To start with, Yellowfin Tuna in latin is Thunnus albacares – meaning literally albacore tuna; whereas the Albacore is called Thunnus alalunga, meaning longfin tuna.

In the Middle Ages, the Portuguese and Spanish sailors would call the larger tuna they were catching in the Mediterranean Sea and the Atlantic Ocean albacora. These fishermen were very familiar with several tuna species such as bluefin tuna, skipjack tuna, little tunny and albacore.

Although some believe the etymology of Albacore comes from Latin alba cares, meaning “white meat”, we think it’s more likely the word has an Arabic etymology. The origin of the word Albacore would come from Arabic “al baqara”, meaning “milk cow” – The Albacore tuna was fish “as big as a milk cow”.