It will come as no surprise to any fishing fan out there that the popular Spanish Islands, known as the Canary Islands, offers some of the best fishing grounds found in Europe. Right now we are happy to report that the tuna season has started with a chaotic frenzy this year. Almost all of our booked charters have been reporting high success rates of catching tuna species such as bluefin, bigeye and albacore tuna. Some of the bluefin tuna have been weighing in at an estimated 200 plus kilograms (450lb+) as well.

It is typically a little early for the tuna to have arrived into the area around the Canary Islands but recent reports from happy captains and ecstatic clients have revealed the tuna have been in strong numbers now for the past couple of weeks. Off the Fuerteventura coast, captains have been reporting regular sightings of bluefin tuna breaking the surface of the water in amongst a large swarm of bird activity, known in the fishing world as “Frenzies”. Within these frenzies, our clients have been landing regular bluefin tuna species.

Fuerteventura though is far from the only destination in the Canary Islands being inundated by different tuna species of late. As well as the bluefin tuna, fishing charters in La Gomera are having great sessions catching bigeye tuna and albacore. While in Tenerife multiple charters recently have been catching and releasing exciting catches of bluefin tuna, bigeye and albacore.

Arguably the most exciting of the tuna fishing is currently being reported in the north of Lanzarote. Enormous shoals of bluefin & bigeye tuna have been spotted feeding on the surface of the water in the last few days. The highlight of the week come when a group of five fishing with Captain Berto on board the fishing charter La Graciosa Sport Fishing were able to all get hooked up and successful land tuna at the same time. We have the proof below with five exhausted but happy fisherman. 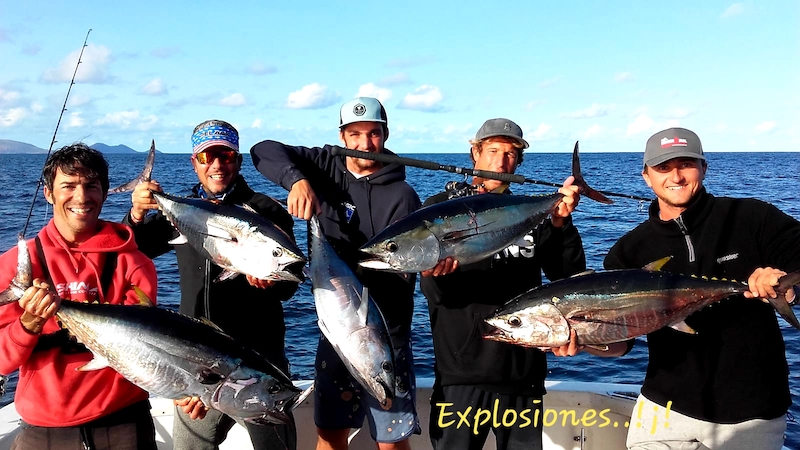 Spinning with light tackle for tuna in Lanzarote, La Graciosa.

You know the fishing is ON FIRE when a whole boat is landing fish at the same time. Do you have a holiday booked just in time to get in on some of this action?

We have a large selection of fishing charters in and around the Canary Islands that are currently being swamped for requests for fishing trips over the next few months. The tuna fishing in this area has a reputation of being some of the best waters to fish in across all of Europe and the timing is perfect to get yourself and a group of friends or family members in on the action.

Our charters are all operated by the best companies in the areas meaning you will be sure to have a professional and well-prepared trip. The boats and fishing equipment will be of a high standard to ensure you have every possible chance to land one of these mighty tuna for yourself. Fishing techniques will depend on the conditions of the day and will vary from trolling, popping and cast fishing.

Find a family member, group of friends or plan a solo trip deep sea fishing in the Canary Islands with our help. We will make the process smooth and rewarding. Get in contact today or search the selection of charters found online.