You are here: Home › OUR BLOGGERS › PLACES › Fishing in Spain: What do you need to know?

Fishing is popular all around the globe and it’s no mystery as to why.  How many sports can say that their game is calm yet harsh, or gentlemanly but competitive?  A fishing trip can be a small two-hour trip or a huge journey to bring days of fun. There is plenty of fascinating gear involved, along with many different methods of fishing and places to do it. The sport of fishing is also productive.  Along with having an enjoyable time, it lets you bring food to the table.

Another bonus to fishing is that it’s largely international for coastal countries, like Spain. Yet, unlike many sports, fishing isn’t the same in two areas.  In Spain, fishing has a much larger role than you would find in America or most other parts of Europe. When traveling with the intent to do some fishing there, it’s important to be aware of what to expect!

Is fishing common there? What gear do you need?  What type of fish can be caught there? Is a license required?  These are just some of the questions to consider as an international fishing expedition begins.

Is Fishing Popular in Spain?

In short, yes!  Spain is not only a popular fishing destination.  It is also number two on the list of the biggest fishing market in Europe, second only to Portugal.

Spain’s marine assets are incredible.  Just off the base of the coastal country is the EEZ or Exclusive Economic Zone.  This area is designated as being roughly 200 miles or about 322 kilometers off the coast and is known to be one of the best places for commercial fishing.  If the EEZ doesn’t sound like your type of fishing environment, there are plenty of other options. Spain has many more lakes and seas to fish in, and plenty of fish to find there!

What types of fish can be found in Spain?

Another great fact about fishing in Spain is that freshwater and saltwater environments can both be found within Spain’s fishing borders and Each water type holds different fish.

Common saltwater fish in Spain include:

When it comes to freshwater fishing in Spain, there is much more variety, but many more restrictions as well!  Due to climate change and overfishing, many fish species aren’t doing so well in the Spanish waters. Researchers have been evaluating the species populations and assigning them proper labels to determine their population.  Fish in the freshwaters of Spain range from Critically endangered to non-threatened with different level of restriction placed on each.

Critically endangered fish species will have severe restrictions as to how many you can catch if you are allowed to catch them at all.  In most cases, these fish are protected in hopes of preserving their species.

Next down on the list is the endangered species of fish.  These fish will have slightly lax restrictions compared to the fish much closer to extinction.  If you are able to catch and keep these fish, there may be strict limits in place.

The endangered fish include: 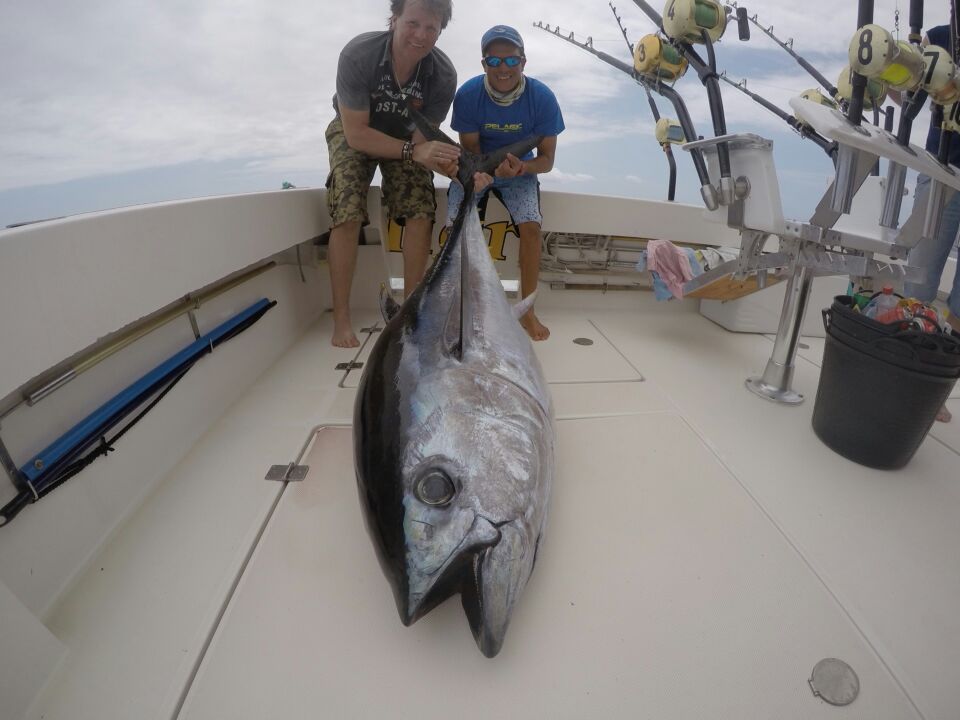 The last label to keep an eye out for is the species labelled as vulnerable.  Vulnerable species are not considered “endangered” but due to factors at play, they are at risk.  These factors could be climate change or being abundantly fished, or it could be something out of human control like their breeding patterns.  There might be mild restrictions or as little restrictions as the fish who are not in any danger.

Finally, there are the fish with no warnings.  Other than general restrictions and catch limits, it’s unlikely you will run into much trouble with these fish.

Even with the endangered fish, freshwater fishing is still huge in Spain.  There are plenty of freshwater environments that are perfect for fishing for both recreational and commercial purposes.

Where to Fish in Spain

Spain’s geography is absolutely fascinating.  Its surroundings leave plenty of perfect spots for fishing, with some being more popular and easier to get to.  Local fisherman and guides have documented these areas in online blogs.

If your goal is commercial fishing, then take a look at EEZ (Exclusive Economic Zone).  This is the term given to roughly 200 miles of Spanish coastline designated exactly for this purpose.  The area is vast, allowing for multiple fishing methods whether you want to fish with a fishing hook or a giant net.  According to the local fisherman, this is where you will find the most success.

Fishing is a fantastic sport as well as a commercial endeavour.  There are several lakes, reservoirs, seas, and other bodies of water that are plentiful when it comes to fish.

Perhaps the biggest location recommended by multiple tour guides is the region of Andalucía or quite possibly the Spanish Islands, known as the Canary Islands.  The area around Andalucía is an autonomous rural community within Spain. It borders along the Atlantic Ocean and the Alboran sea. You can find all freshwater fish types there and there are 64 freshwater reservoirs to choose from.  The area could easily be made into a weeklong fishing trip with all the options available.

There are several more areas within Spain to choose from as well.

The River Cares in Northern Spain is described as rough but filled with beautiful sights.  The river is known for its salmon.

Coto Tempramas is a beautiful body of water that almost looks as if it was taken right from a fantasy novel.  The best time to go there is during the spring between April and May. Several pools will be exposed, and fish tend to gather there.

Another notable area is Coto de Sobrado.  The area is best to go to in June, as there is a lot of trout within the body of water.

Coto de Villagonzalo is popular also for its plentiful fish, but rather than trout, Salmon populate its waters.

The final place multiple locals highly recommend is Rio Noguera.  The clear water is beautiful…and it allows anglers to look right at the wonderful rainbow trout.

A few other recommended areas include:

In Spain, there aren’t many places you can go without the world of fishing around you!  These areas contain many wonders, with many techniques to go with them.

With such a large fishing community, there are plenty of techniques for how to get your catch.  The most popular techniques include Almadraba (ancient tuna fishing technique), fly fishing, and deep-sea fishing.

Almadraba has a loose translation of “a place to strike”.  This method particularly pertains to net fishing, but its goals are a bit more specifically aimed at catching bluefin tuna.  A net is placed in the Atlantic Ocean as the bluefin tuna cross for their mating season, trapping them on their natural journey.  This tuna fishing method pertains to commercial fishing and is seldom used for recreational purposes. 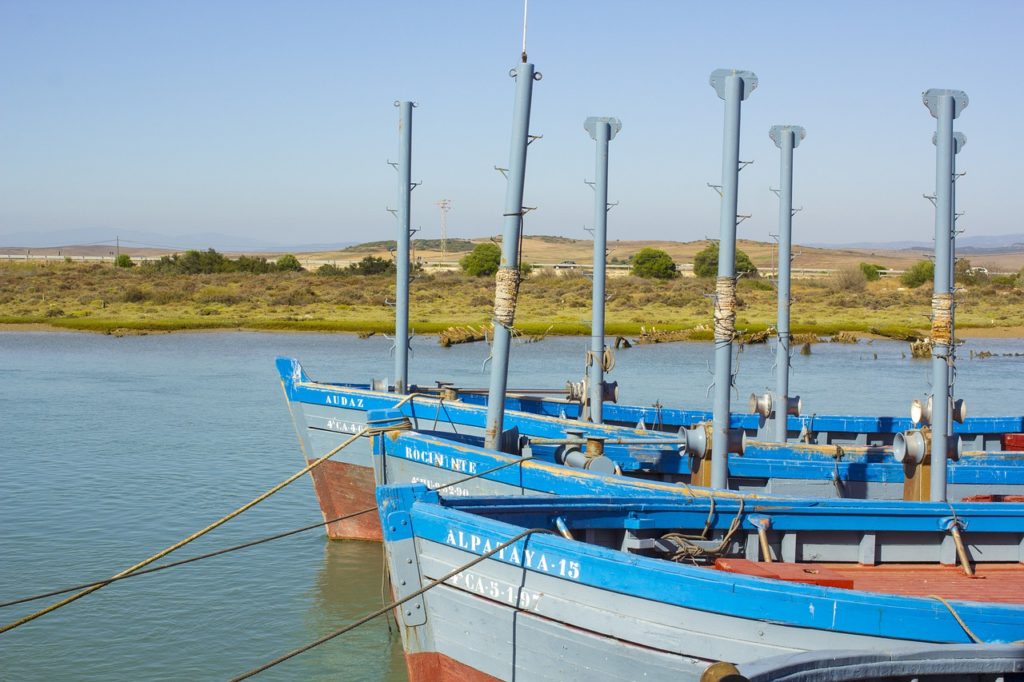 Fly fishing is what you would usually think of when “fishing” comes to mind.  A rod and bait (either live or artificial) are used to lure fish. With the advancement of fishing equipment suitable for fly fishing, it is now a popular technique both in freshwater and saltwater locations chasing a range of different fish species.

Deepsea fishing is done with similar equipment to fly fishing but of course, specialised for the environment and differences in technique. Your catch has the potential to be several meters below the surface and offers an angler a tough fight on the way to the boat.  Fishing rods are much more weighted for this activity.

How to find fishing charters in Spain

Fishing charters are great for many reasons.  Multiple passengers go on these to have a wonderful time and score some dinner along the way.  You can join them no matter your knowledge and difficulty level. These can be rented and/or leased by an individual.  Typically, these are better for deep sea fishing rather than fly fishing.

The age of the internet is extremely helpful when getting a fishing charter.  TripAdvisor will link you to some wonderful options if you’re looking at your trip and planning ahead.  It has all the resources you would need. Another more local option is TomCatch. The site will set you up with a fishing charter as well and are specialists in finding the best fishing charters across Europe and other places around the world.

Is A Fishing License Required in Spain?

Yes.  No matter what type of fishing you are doing, you are required to have a license.  Licenses are, of course, different for different types of fishing (Saltwater VS Freshwater or Commercial VS Recreational) but all forms of fishing need one.  In some regions, these licenses are free for residents over 65.

Saltwater fishing licenses are somewhat simple to get and may not be required depending on how little fishing you do.  Due to the large populations of endangered fish (as seen in the list above) freshwater licenses are required whether you intend to catch one or one hundred fish.  Fishing in the freshwater environments including rivers, lakes, and estuaries requires an additional angling license.

Residential applications and foreign applicants without a previous license are required to pass a Spanish test before they receive their license.  An applicant with an existing foreign license can bypass it.

If you’re seriously looking to fish on a vacation, be sure to plan ahead and check out Tomscatch.

All the Fishing: A Summary

When it comes to fishing, Spain and its geography are immensely popular.  How could it not be when it’s surrounded by the coastline of the ocean and the seas.  There are areas, such as the EEZ, designated for commercial fishing. Spain supplies a huge portion when it comes to the European fishing market thanks to their vast resources.

The fish in Spain is wonderful, but it’s important to note that due to overfishing some fish species have some really low populations and maybe facing extinction if they continue to be vastly fished.

There are many beautiful areas for fishing, especially the autonomous community of Andalucía.  With these come several ways to successfully catch fish.

That all being said, make sure you have your fishing license!